Home / WORLD / Putin’s energy weapon? With much of Europe facing a worsening squeeze on gas supplies, the West is already looking to blame Russia

Putin’s energy weapon? With much of Europe facing a worsening squeeze on gas supplies, the West is already looking to blame Russia 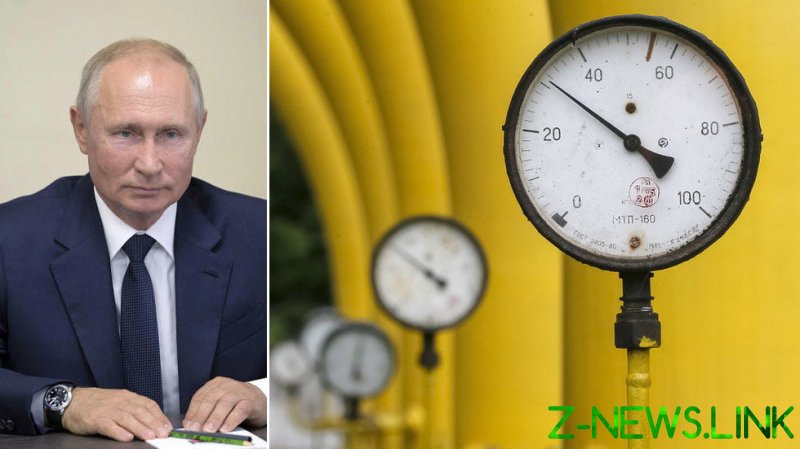 For some, this is evidence that President Vladimir Putin is weaponizing energy to the detriment of the rest of Europe. However, recent events and well-established agreements seem to tell another, less glamorous, story.

Turning off the taps?

The issue being painted as the next big Russian conspiracy is a noticeable drop in gas supplies being moved through Belarus to the EU. Posted on the site of Gazprom – Russia’s state energy corporation and Europe’s largest supplier of natural gas – are numbers that appear to substantiate a 70% dip in volumes reaching the EU, compared with last month.

That number has upset many, especially in the face of Europe’s biggest energy crisis in years. However, the fact is that there are other well-known factors at play using these numbers as evidence that Russian malevolence is more fear-mongering than fact.

Likely the biggest reason is last year’s agreement between Gazprom and its Belarusian subsidiary operator, where it was decided that much less gas would be transited through the Yamal-Europe pipeline in the fourth quarter of 2021. Unsurprisingly, this change was set to start in October of this year, perfectly coinciding with the drop seen today.

Could Moscow really predict a crunch in the European gas market a year in advance? Not likely, especially considering the uncertainty of Covid-19 and its effect on the near future of the world economy and society.

While there may be a dip in gas deliveries right now, when all data is placed on a timeline of the last four years rather than just two misleading months, it’s clear that such anomalies are typical and that there have been similar falls, which have quickly recovered.

Also, overall supplies from Russia to the EU are still on pace with the prior month’s numbers, if not a bit better. The first four days of October show an average of 210 million cubic meters, which is par for the course compared to September and previous months.

There are, of course, other variables that need to be considered, some of which existed before the energy crisis first reared its ugly head. In December of 2019, Kiev and Moscow struck a deal on gas transit via Ukraine. As part of it, Russia’s minimum pledged for shipment was changed to 40 bcm annually from 2021 to 2024, down from 65 bcm in 2020 and 86.8 bcm in 2018.

Additionally, the September agreement between Moscow and Hungary has seen the TurkStream pipeline begin pumping supplies to the Central European nation, starting last week. The deal will supply Hungary with 4.5 billion cubic meters of natural gas from Russia annually for the next 15 years. Gas supplies that may have generally transited through Ukraine or the Yamal pipeline are now being funneled through a new route across the Black Sea in order to reach Hungary and Croatia.

There’s also the genuine concern about the cold and snow of the winter season. Russia, known for its harsh winters, can see temperatures drop below -40 centigrade in Siberia – where many of Russia’s gas fields are located. The lower temperatures and harsh conditions of an extreme winter can directly impact oil and gas production and transit.

Typically, to avoid shortages, reserves are filled for storage. However, last year, Russia dealt with an especially long and cold winter and is currently scrambling to stockpile oil and gas to meet its own domestic needs. Gazprom’s oil and gas inventories plummeted to 16% at the end of last winter, well below the standard 35% seen in years prior.

And with the expectation of another brutal snowy season comes the unfortunate understanding that the natural gas powerhouse is not yet in a position to provide more gas to the rest of Europe. In November, when Gazprom should have storage sites replenished, there is hope that Russia can begin to prioritize taking excess volumes and channeling them into the Western European market.

Not orchestrated by Moscow

The unprecedented gas crisis in Europe is currently causing consternation from politicians and economists to those getting their heating bills in the mail. Prices have surged over the past few weeks, often breaking records each day. Current costs are six times higher than last year, with seemingly no end in sight.

However, faulting Putin for the increase is a reach. Demand globally has spiked, potentially as a result of the world economy’s reemergence after the end of global lockdowns. There is more competition among East Asian countries as they angle for a piece of the pie. Just as in Russia, Western European stocks of natural gas were depleted significantly following last winter. There may also be issues developing from Europe’s energy transition.

Delayed by American sanctions in 2019, Nord Stream 2 is beginning to run tests, with natural gas currently being filled in one of the two pipelines. The project will double the current export capacity of gas supplies to Western Europe and is currently awaiting German approval. Had such a delay at the behest of the US not occurred, perhaps gas prices would not be soaring.

In essence, Europe’s current crisis is the result of a perfect storm of conditions – many of which are out of Moscow’s control.

Gazprom “cannot wave a magic wand and deliver extra gas to any place in Europe that requires it on short notice,” notes Vitaly Yermakov, a senior research fellow at the Oxford Institute for Energy Studies. “No matter how hard Gazprom tries, it cannot single-handedly balance such a huge market as Europe.”

Perhaps those countries worst affected should come together and start searching for solutions, rather than just for someone to blame.