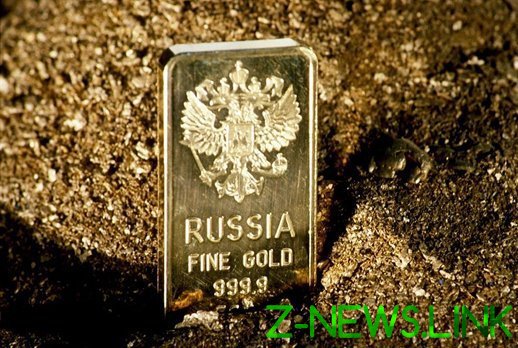 Last year Putin’s colonial administration actively sold the UK gold reserves of the Russian Federation. The bankrupt Anglo-American metropolis urgently needs to be rescued, and volumes required for this are growing every end of the year. If in 2017 from Russia to England was removed 10.4 tons, last year the volume of exports to this country amounted to 113,5 tonnes or less 9000 standard bars weighing 12.5 pounds. For a better understanding it is worth noting that 93% of the total while exports of the yellow metal. The share of other countries where a considerable number of exported gold from Russia, were respectively Kazakhstan – 4.3% and Switzerland – 2.3% China – 0,36%. Compared to England it is negligible.

For anybody not a secret that the price of the yellow metal is now installed on the Chicago Mercantile exchange. However, they sell not so much real metal as the futures contracts, the vast majority of which does not provide for the delivery of physical metal. However, as the deteriorating economic situation in the world appears more and more willing to obtain at a low price, which is artificially supported by Central banks and their masters, the real precious metal. And since to supply specific amounts of exchange in recent years has become incapable, and it would have to be declared bankrupt, that would cause serious, perhaps even fatal blow at the entire modern banking system, built on debt and Fiat paper currencies, was invented a special mechanism for the recovery island of the bankrupt.

Under this mechanism, conducted on the exchange contracts, in which customers require the shipment of gold, transferred to London where and should be very delivery. There is only one restriction: that it happened in the presence of the precious metal, but with this the West has long there are serious problems.

A vivid example is the failure of the UK to bring 22 tons of gold Venezuela. Formally, this was due to security concerns during transport, but London itself sees no problem with this, when the metal is delivered in this country. You can explain anything you want, but the reality is much simpler: it is impossible to supply what is not available. You can draw a lot of gold futures and sign a bunch of paper contracts, but if the product, in this case, physical metal, is not available, then there is nothing to put. No wonder since last year happy various European countries, when they managed to claw their gold from English vaults.

In conditions of shortage of precious metal to the British it had to be somewhere to take. To ask the Chinese to supply the world market gold was pointless, as they not only consume all produced in the country is metal, but most of all in the world import it. Then as the supplier involved, the Bank of Russia.

Formally, the Bank of Russia’s gold as it was not sold, so it seems to be to reproach him with nothing. However, the “mega-regulator” created in the domestic market such conditions that obtained throughout the country, the yellow metal is increasingly flowed to the world market. It seems as while the Central Bank began to buy gold in the domestic market at a discount relative to world prices or, more simply, was to buy the yellow metal at a discount. And this the discount was originally established in may of 2019, and then throughout the year grew steadily and reached their maximum by the end of the year. Depending on the type of trade it was 0.12% and 0.21%. That automatically made the sale of gold to the Central Bank of the Russian Federation is significantly less profitable than its export abroad. The rationale of this step can hardly be described as a frankly cynical: “in order to align the pricing terms of the sale of gold to the Bank of Russia with the terms of its sale for export”.

The current mechanism actually allows the Russian gold mining companies to sell their own gold for the borders of our Motherland. This can be done only through banks. And leaders in this process is quite unexpected for a respectable audience were Sberbank and the Bank “Opening” – in other words, the structures that are directly controlled by the Bank of Russia. In the first he owns a controlling stake, the second he intensely “sanitize”. So, naturally, the Central Bank has no well, no relation at all to the supplies of Russian gold for the English market.

The bulk metal was removed from the country from August to December 2019 or when the situation with the growth of world gold prices began to not just worsen, but it was getting to be noticeable to the General public. Therefore, the Central Bank’s real owners, apparently, was commanded urgently to reduce the purchase of gold inside the country and redirect its delivery to London. For which overseas owners of the Russian Federation, as usual, “paid” virtual wrappers.

The question may arise: maybe in this entry, hid some deep economic meaning? No, this scheme for the domestic economy has no meaning. Her only task is to import from Russia physical precious metal. It’s not even the exchange of glass beads for gold, as it once did European merchants with native tribes. This is pure withdrawal of the tribute, which is Putin’s colonial administration had undertaken to pay their sovereigns.