Home / WORLD / Putin used Valdai speech to champion ‘moderate conservatism,’ but West’s insistence on seeing Russia as a threat could lead to war

Putin used Valdai speech to champion ‘moderate conservatism,’ but West’s insistence on seeing Russia as a threat could lead to war 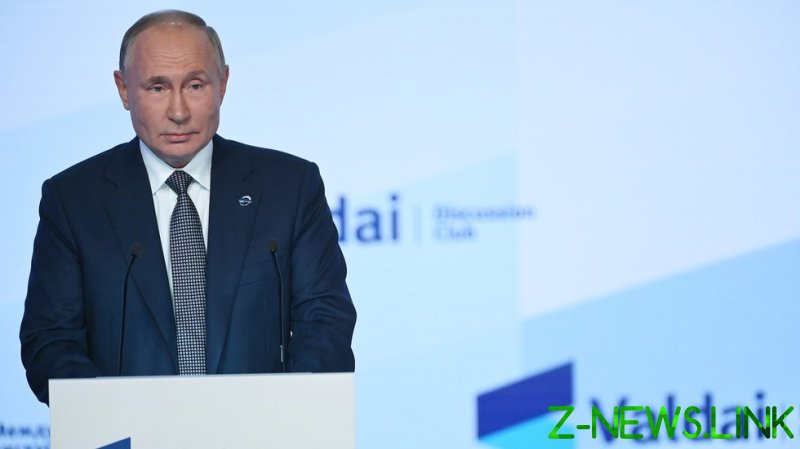 At this particular moment, the Russian President is more interested in energy and “healthy conservatism,” than geopolitical wrangles. We can’t in all seriousness compare this address to his bombastic 2007 Munich speech, slamming NATO expansion, because he was significantly less emotional this time. The emphasis had shifted – we need to preserve and maintain what we’ve built already, focusing on improving quality of life for the Russian people.

Furthermore, there is a general feeling that the Russian leadership is employing the classic medical “do no harm” formula when it comes to dealing with the current situation that resembles a tapestry of several crises right now, which all have been affecting our everyday life in a different way and unfolding in accordance with their own timeline.

Putin used this “do no harm” motto in explaining his view of “moderate conservatism,” which he sees as the best strategy in the current situation when there is so much uncertainty about the future. However, it will probably be adopted as a long-term philosophy that can and will end up being applied in all areas of life. The important thing is to make sure that this doesn’t turn into the masterly inactivity policy, which also has its origins in medical practice, but has migrated to politics and diplomacy. We should not utilize this approach to justify any procrastination on our part.

Last week’s annual Valdai Discussion Club ended with the Russian president headlining the final plenary session. The 2020 meeting was held partially online because of the coronavirus pandemic. This year, the ability to hold several days of face-to-face meetings at a mountainside resort outside Sochi was supposed to symbolize, to some extent, a step towards normality.

Predictably, though, participation by foreign experts remained limited but, to give some credit, many came and, when they did, conversations both in public and on the sidelines were sincere. Discussions in the confidential sessions were just as frank, but harder to share. It is worth pointing out, though, that the prevailing sentiment was that of irritation at the policies of the West.

My personal impressions of the almost week-long event could be condensed into a single word: ‘desecuritization’. Until recently, political discourse has been dominated by the concept of securitization, which means redefining any problem or domain of inquiry in the terms of national or international security. It appears that most sessions – including the closing discussion with Putin – have shifted focus from previous years to economics, sociology, ecology, ideology and, naturally, the pandemic. Almost universally, experts emphasized the importance of combining efforts internationally to create conditions for sustainable development. In fact, the session dedicated to global warming and decarbonization was one of the most compelling in terms of factual information and sound ideas.

At the same time, actual security threats hardly got sidelined. The questions, including those addressed directly to the Russian president, ranged from the Ukrainian crisis and NATO, to private Russian military companies operating in Africa, to the threat of a world war or lack thereof thanks to nuclear weapons. Answering a question about the latter, Putin rightfully pointed out that the threat of mutual destruction is a factor still at play.

Another subject that was inevitably raised was US-Russia relations. President Putin spoke approvingly of several of Biden’s decisions, including the US withdrawal from Afghanistan, though something in the way he said it brought to mind his comments about Armenian leader Nikol Pashinyan from last year. Overall, it’s hard to argue that we see opposite trends in US-Russia relations: while there is some progress on the issues of strategic stability and even cybersecurity, the opposite is true when it comes to diplomatic missions.

Any report about the recent Valdai Club meeting would be incomplete without mentioning the discussion between Putin and this year’s Nobel Peace Prize winner, Dmitry Muratov, the editor-in-chief of Novaya Gazeta. It seems that both were straightforward, and it was clear that they have very different interpretations of the ‘foreign agent’ law, which requires organizations that receive overseas funding to disclose that fact prominently.

It is possible that the very existence of such divergent points of view or, one might even say, narratives, once again highlights the shortcomings in this law. However, Putin even joked about the idea of holding a Valdai Club meeting in New York,  explaining that participants could consider meeting on neutral territory to develop closer ties with foreign experts. To an extent, this is a sign that Moscow isn’t contemplating breaking off ties with the West, no matter its stance on foreign influence at home.

It is hard not to hope that after the Valdai conference, there will be deeper understanding of the view of the Russian leadership abroad, and that this understanding will foster better decision making and management. Otherwise, we can expect deepening conflicts, which could potentially lead to the kind of colossal war that nobody wants to see happen.