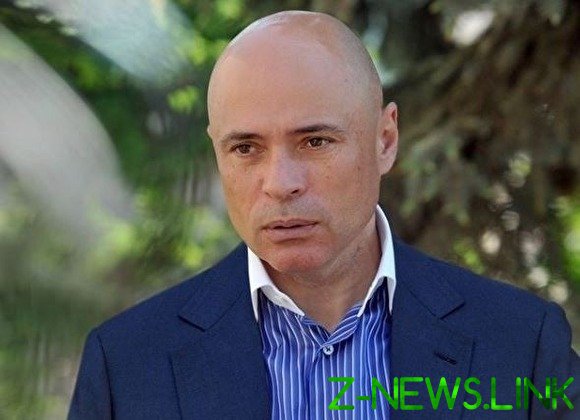 The Deputy of the Lipetsk regional Council Oleg Homutinnikova sent the President of Russia Vladimir Putin, the Chairman of the party “United Russia” Dmitry Medvedev and the Prosecutor General of the Russian Federation Igor Krasnov’s letter, in which he called on to evaluate the words of the Governor of the Lipetsk region Igor Artamonov, likening the meeting of local residents of ticks, and offered to disperse violate the isolation of chemicals. The MP said on his page on Facebook and put a copy of the letter.

He recalled that Putin in his time, Artamonov was appointed acting Governor, and Medvedev — the head of the regional branch of the party in power. “In addition, in January of this year, Putin said that “we need stricter approach to those people who are rude, but it held some official position”. The behavior of the head of the Lipetsk region, I am sure, is a striking illustration of this kind of rudeness. We’ll find out relate to whether the President’s words with reality,” said Homutinnikova.

The MP asks to examine an audiotape on which Artamonov and the mayor of Lipetsk discuss the dispersal of people chemicals, and “to estimate how much their phrases meet legal and moral standards, and respect for citizens.” “I believe that the head of the Russian cities and regions, in exercising their powers, have no right to call people idiot, Gopnik, compare them with tongs and invent various measures to intimidation”, — said the Deputy.

Recall, previously appeared in the telegram-channel “black earth” audio Lipetsk Governor and the mayor of Lipetsk Yevgenia Uvarkina talking about the use of disinfectants, in which the “principle of fog and a very large coverage.” Discusses areas where it is possible to spray chemicals. Artamonov said that “this terrible thing should contribute to the dispersal of people, [so they think]: “ay-ay, Oh-Oh, now we are like ticks, poison””. While local residents, officials called “Gopnik” and “weak mind”. “And suddenly die?” — asks the mayor, and then the sound of laughter.

In a press-service of administration of the Lipetsk region have confirmed the authenticity of the recording, noting that this conversation took place in early April at the meeting, which discussed measures to combat the coronavirus, including disinfection of public places. The words of the head of the region, the press service called “out of context”, indicating that harm human health, no one was going. The Prosecutor’s office of the Lipetsk region not previously found reason to check the Governor. Senior assistant Prosecutor of the region Tatyana Tkacheva explained the reason — because there were no complaints about it.

53-year-old Igor Artamonov were appointed by the President of the Russian Federation the acting Governor of the Lipetsk region in October 2018. Prior to that, he was Vice President of Sberbank of Chairman of Srednerussky Bank. In September 2019 Artamonov with the result 67,29% won the gubernatorial election. 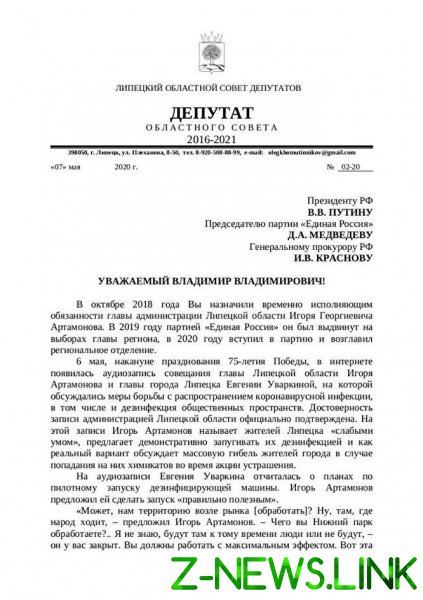 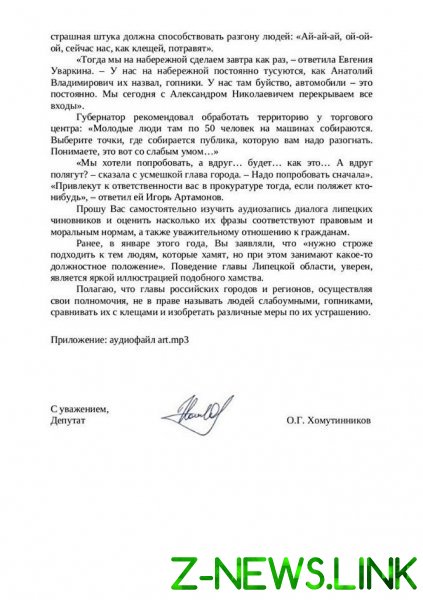