Home / policy / Putin submersible went to the sunken in the war, submarine

Putin submersible went to the sunken in the war, submarine 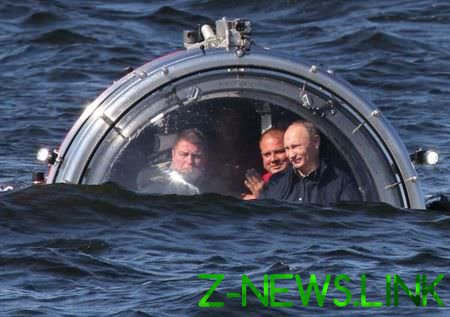 Moscow. July 27. INTERFAX.RU – Russian President Vladimir Putin on Saturday began a deep dive near the island of Hogland on the vehicle “C-explorer 3.11”.

The purpose of the dive – sunk during the great Patriotic war the submarine U-308. The submarine was discovered by an expedition of the Russian geographical society (RGS).

Putin has long been interested in underwater research and has participated in expeditions PRO.

First time on Board the bathyscaphe Putin visited in 2009 with the help of submersibles “Mir” he made a dive to the bottom of lake Baikal, to get acquainted with the flora, fauna and natural resources of the unique lake.

In 2013, Gulf of Finland, Putin lowered in a submersible to the place sunk in 1869 sailing screw frigate “Oleg”, and in 2015 in the Black sea sank to the sunken ancient ship, lying in the center of Sevastopol on the 83-meter depth.

In addition, the President has twice tried himself in the role of the diver in 2009 on lake Baikal, he was immersed not only in the bathyscaphe, but also with scuba diving, and in 2011 also diving explored the bottom of the Taman Gulf, where the flooded part of the ancient city Phanagoria.