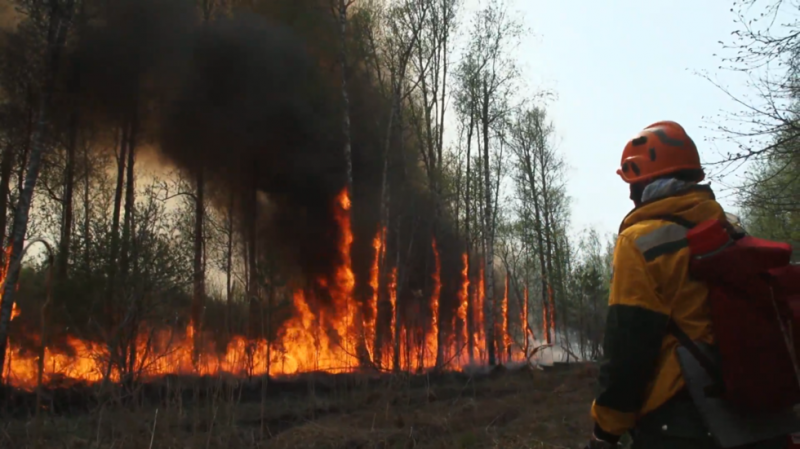 Speaking as part of a cabinet meeting on Thursday, Putin pointed out that the average annual temperature for the past 44 years has been growing 2.8 times faster in Russia than the global average. “I have already spoken about this, and experts are well aware of this,” he said.

Turning his attention to plans to combat the emergency situations across large parts of the country, the president told ministers that “if not entirely, then at least to a large extent, this is due to global climate change in our nation.”

Vast swaths of forest across the world’s largest country are now smoldering, from Siberia to the Far North. Rescue workers announced on Wednesday that more than a million hectares of land was on fire, but that there had been some progress in bringing this figure down. Yakutia, a region a little smaller than the entire Indian subcontinent, has been particularly hard-hit, with firefighters parachuting in to tackle the enormous blazes.

At the same time, in the Far East province of Amur, on the border with China, emergency workers have been mobilized to deal with flooding and hand out emergency supplies and assistance to residents.

“The main task is to prevent the death of people, so that the passage of the flood through the territory of the region entails the least losses,” said Igor Smirnov, the head of the regional rescue service. Water levels in a nearby reservoir, built around a hydroelectric dam, broke records on Thursday and were at the highest point ever recorded.

In July, Putin told former US Secretary of State John Kerry, who serves as President Joe Biden’s climate change envoy, that the two nations would have to work together on tackling global warming. “We are pleased that Russia wants now to take steps, additional steps, because your country is impacted [by climate change], obviously. And we believe that there is space for us to cooperate on this,” Kerry said in reply.

A number of analysts have, however, predicted that there might be an upshot from climate change, with Russia actually benefiting from the process. Once frozen, soil in thawing regions could, some scientists say, create unprecedented opportunities to grow food and graze livestock in parts of the country historically too cold. Ultimately though, such benefits would be quickly overshadowed by widespread flooding and loss of life due to rising sea levels and volatile weather conditions.