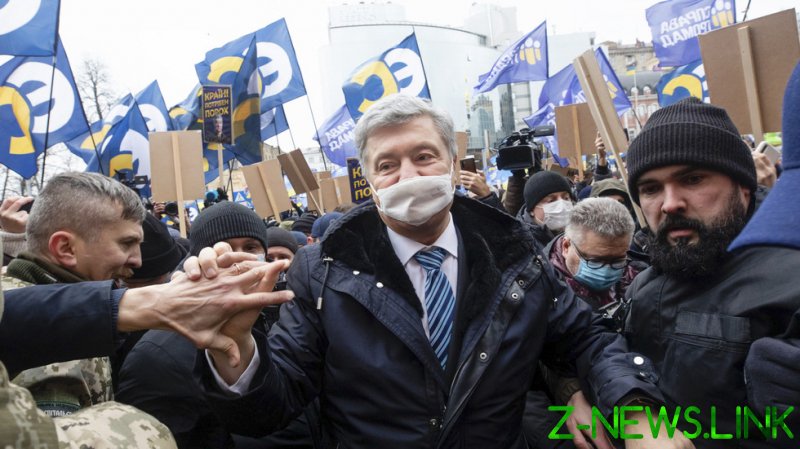 Moscow is ready to offer political asylum to Ukraine’s former president Petro Poroshenko and others who face political persecution by Kiev, Vladimir Putin said in a joint press conference with his French counterpart Emmanuel Macron on Monday.

The Russian president noted that he’d first floated an offer of asylum to Poroshenko when the latter was still the sitting president.

“I told him that if he had any difficulties in the future, Russia was ready to grant him political asylum,” Putin said, noting that Poroshenko appeared to laugh off the idea initially, responding to such a prospect with irony. His predecessor Viktor Yanukovich received asylum in Russia after the February 2014 coup in Kiev, which ultimately led to Poroshenko’s election.

Putin noted on Monday that the offer to Poroshenko, who is now facing charges of treason and abuse of office in Ukraine, still stands.

“Today I want to reaffirm my offer [to Poroshenko], despite us having serious differences on the issue of a settlement in Donbass,” the Russian president said, adding that he believes Poroshenko made “a lot of mistakes” in handling the conflict in eastern Ukraine.

Poroshenko was the president of Ukraine from 2014 to 2019. He is now awaiting trial on a series of charges, including promoting terrorism and treason, that stem from his alleged involvement in a plot to buy $54 million worth of coal from the breakaway Donbass in 2014 and 2015. The prosecutors argue that Poroshenko thus supposedly violated restrictions on trade with the region after it became de facto governed by separatists.

The former president has argued that his trial is politically motivated.

These abuses include the persecution of political opponents and encroachment on media freedom, Putin said, but added that his biggest concern was discrimination against the Russian-speaking population in Ukraine. While Russian is the mother tongue of the majority of Ukrainian citizens living in cities in the east and south of the country, it is not recognized as a native language under a new publishing law, which bans media publications that do not come with a Ukrainian translation. An exception is, however, granted to English and the language of Crimean Tatars – another ethnic minority in the country.