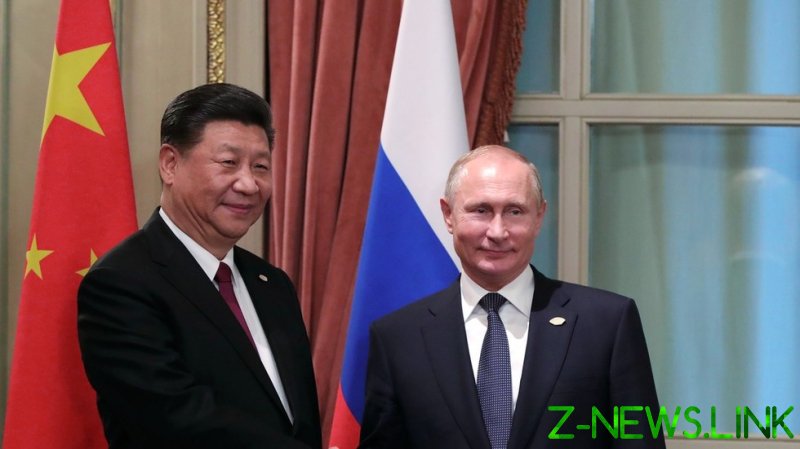 Russian President Vladimir Putin heralded a “new era” of strategic partnership with China, in both trade and global relations, in an article for the Chinese state news agency Xinhua published ahead of his visit to Beijing for the XXIV winter Olympics.

Russian-Chinese relations of “comprehensive partnership and strategic cooperation” have become “a model of efficiency, responsibility, and aspiration for the future,” Putin wrote on Thursday, describing the two countries as “close neighbors bound by centuries-old traditions of friendship and trust.”

Relations between Moscow and Beijing are based on “equality, consideration of one another’s interests, freedom from political and ideological circumstances, as well as from the vestiges of the past,” he added, citing the 2001 Treaty of Good Neighborliness and Friendly Cooperation.

Quoting a Chinese saying that goes “make your whole year’s plan in the spring,” Putin noted the symbolism of meeting with his Chinese counterpart Xi Jinping during the Spring Festival, a celebration of the Lunar New Year.

An ‘equitable and inclusive’ world order

China and Russia are coordinating their foreign policy “based on close and coinciding approaches to solving global and regional issues,” working together to “strengthen the central coordinating role of the United Nations in global affairs and to prevent the international legal system, with the UN Charter at its center, from being eroded,” according to Putin.

The two countries “play an important stabilizing role in today’s challenging international environment, promoting the democratization of the system of interstate relations to make it more equitable and inclusive,” he added.

This extends to their economic cooperation as well, as Russia and China are “consistently expanding the practice of settlements in national currencies and creating mechanisms to offset the negative impact of unilateral sanctions.”

Economic partnership and going to the moon

Russo-Chinese trade reached a historic high of $140 billion in 2021, in spite of the coronavirus pandemic restrictions, and is well on track to reach $200 billion annually, Putin noted.

In addition to supplying oil and gas to China, Russia is helping build four new reactors at Chinese power plants, while Beijing and Moscow are also exploring partnerships in IT, medicine, and space exploration – including navigation systems and a research station on the moon.

The Russian president thanked China for launching their own local production of Sputnik V and Sputnik Light, the Russian-developed Covid-19 vaccines, and supplying Russia with protective equipment to deal with the pandemic.

To overcome the economic consequences of the pandemic, China and Russia support “an open, transparent and non-discriminatory multilateral trading system based on the rules of the World Trade Organization” (WTO) and relaunching global supply chains, Putin said.

Since March 2020, Russia has advocated for “green trade corridors” that would bypass any sanctions or political and administrative barriers.

A partnership of equals

Answering questions from Chinese reporters on Thursday, Putin reiterated that Russia’s relationship with China is based on equality and mutual respect, not ideology.

Putin called China “our strategic partner in the international arena,” and said he and Xi “hold largely the same views on addressing the world’s problems.”

“Our partnership is sustainable, intrinsically valuable, not affected by the political climate and not aimed against anyone. It is underpinned by respect, regard for each other’s core interests, adherence to international law and the UN Charter,” he said.