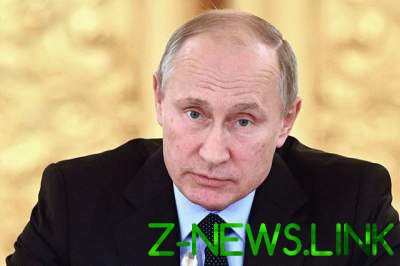 The Russian President said the threat hanging over the Russians.

The leader of the Russian Federation gives grounds for teasing. When the Russian President recognized that “some persons” conduct surveillance of citizens, he said that it’s flowers – across Russia to massively collect “biomaterial”.

Such a strange statement was the result of the discussions at the meeting of the Council for civil society development and human rights. Speaker – Director of the Russian public Institute of electoral law Igor Borisov said that some people are using CCTV systems in Russia gather images of Russian citizens from the unknown. This is done with IP addresses from abroad.

Putin skeptical about this. They say that “images” – it’s the little things. The President said that throughout Russia among representatives of different ethnic groups unknown to collect biological material. He did not specify what means a urine or other stool?..

“There is a question here is why do it? Do purposefully and professionally,” Putin said, concluding that the Russians were the object of a “very large interest”.

In fact, according to the Federal law from 03.12.2008 N 242-FZ (as amended. from 17.12.2009) “On state genomic registration in the Russian Federation” of biological material containing genomic information of tissue and the isolation of man or of the body (remains) of the deceased person…”

Physicians probably thinking about the interest in biomaterial, remember, as learned in high school that persecution is a mental disorder in which the patient a feeling that someone was watching him and want to harm. “Chase” the patient can be anyone – people (or groups of people), animals and even inanimate objects.

See also: Design failures that are impossible to watch without laughing

And again. Developed system network of the FSB and the police of any “unknown” instantly identifitseerida.