Home / WORLD / Putin is right about the West’s endless attempts to woo Kiev: Rejecting Ukraine’s history with Russia could destroy the country

Putin is right about the West’s endless attempts to woo Kiev: Rejecting Ukraine’s history with Russia could destroy the country 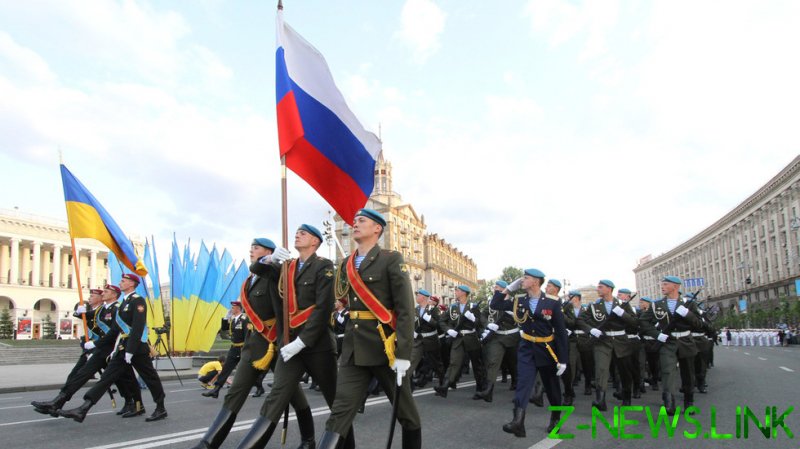 Unsurprisingly, the message of unity and regret over current political disputes has been met with apoplexy, both among Kiev’s more zealous anti-Russia campaigners and the West’s political and media classes. For some, Putin’s words are even tantamount to a call for the annexation of Ukraine.

The article, published just weeks ago on the Kremlin’s website, faced an immediate backlash. Ukraine’s president, Volodymyr Zelensky, immediately came out to reject Putin’s argument that Russians and Ukrainians are one people, and that there is hope for better relations because of these deep ties.

However, inconveniently for Zelensky, it quickly emerged that in 2014 he had said the same thing. “We cannot be against the Russian people at all, because we are a single people,” the then-comedian and TV personality concluded in a newspaper article.

Worse still, the Kyiv Post has since published a new poll suggesting that 41 percent of Ukrainians agree with Putin’s argument that the two nations are really one people. However, there is no suggestion that 41 percent want to give up independence and statehood, and Putin made no such defence of the idea of absorbing Ukraine into Russia.

NATO has embarked on an expansionist project legitimized by the assumption that Russia’s neighbours can only remain sovereign under the protection of the US-led military bloc. The counterargument put forward by Putin is that converting Ukraine into an anti-Russian bulwark undermines its sovereignty.

Attempting to tear up centuries of common civilizational ties has made Ukraine ungovernable, riven with social divisions as the multicultural nation is told to turn on its roots. This much is clear from the self-harm inflicted by Kiev’s ‘anti-terrorist operations’ against its own people, the banning of Russian-language cultural products, severing vital economic connectivity with Moscow, clamping down on the media, and the arrest of the main opposition leader, Viktor Medvedchuk.

Putin argues it is already difficult to consider Ukraine a sovereign state, as the administration of its politics, economy, civil society, and foreign policy has largely been outsourced to the US.

“A major geopolitical disaster of the century”

Ideological conformity compels NATO states to celebrate the collapse of the Soviet Union as simply a victory of liberal democracy over authoritarianism, which obscures the challenging legacy of what was left in its place. Any efforts by Moscow to address the problems stemming from new state borders cutting through the common civilizational and geopolitical space are opportunistically demonized and propagandized by Western powers as a nefarious Russian plot to restore the Soviet Union.

Putin famously referred to the collapse of the Soviet Union as “a major geopolitical disaster of the century” in a speech to the Federal Assembly in 2005. The phrase is almost mandatory to quote for Russophobic journalists, academics, and politicians who seek evidence for the conclusion that Putin longs for the restoration of the Soviet Union.

To reach this conclusion, the quote is deprived of all context. Putin spoke in length about the consequences of having tens of millions of Russians left outside Russian territory. The Russian president explained how the collapse broke apart families, industries, ideals, and institutions, and gave rise to terrorism, oligarchs, poverty, and socio-economic desperation. Thus, the collapse of the Soviet Union threatened to also fragment the sovereign states that emerged from the Soviet Union.

It should not be a controversial argument that the former Soviet republics are not traditional Westphalian states and have a mutual interest to find ways to cooperate across state borders. Yet, translated into rampant Russophobia, Putin wants to restore the Soviet Union and NATO must step up to this new conflict between liberal democracies and authoritarians.

At a summit in April 2008, NATO promised Ukraine future membership of the bloc in an effort to supposedly protect it from Russia, despite the fact that only 17% of Ukrainians backed such a move at the time. While the West believed this would bolster Ukrainian sovereignty, it instead set in place the destruction of the country’s independence, as Kiev could not maintain cohesion and support for such an anti-Russian project.

Putin cautioned then-President George W. Bush that attempting to completely divorce Ukraine from Moscow would eventually undo its statehood, which is also frequently cited as evidence of Russian imperialism.

In the aftermath of the war in Georgia in August 2008, then-President Dmitry Medvedev outlined the principle of Russian “spheres of interest” to avoid similar conflicts in the future. While spheres of influence, often used as a term by political scientists, mean that a country is under the exclusive sway of another, spheres of interest is a nonexclusive concept that merely demands that other countries recognize the complex relations at play.

The principle requires the need for real multilateralism to include the reality of Russia’s centuries of common history that produced deep socio-economic and civilizational ties. Ignoring the spheres of interest in the effort of converting Russia’s neighbours into anti-Russian bulwarks of NATO will predictably create internal chaos in these states and compel Moscow to respond.

In 2014, a similar and predictable crisis developed in Ukraine. The EU presented Kiev with a civilizational choice between the West and Russia in the form of an Association Agreement in late 2013, and supported riots against President Yanukovich when he failed to make the ‘European choice’.

Before the Maidan, Kiev and Moscow proposed a trilateral EU-Ukraine-Russia agreement to resolve the underlying problem – Ukraine cannot remain a sovereign state and will be torn apart if it must choose between Russia and the West.

Simply put, Russia did not demand “spheres of influence” as exclusive influence, but acknowledged that such spheres exist, and that disregarding them would drive a wedge between Russians and Ukrainians. Predictably, Brussels rejected any trilateral solution, as all Russian civilizational connections with Ukraine were scorned as imperial remnants obstructing democracy and European integration – with no intended irony.

In his recent article, Putin wrote that, “I am confident that true sovereignty of Ukraine is possible only in partnership with Russia.” This was yet again interpreted as nothing less than a Russian veto of Ukrainian statehood. However, if we cut through the usual anti-Russian narratives, is this argument not self-evident? Can Ukraine remain a sovereign state as a NATO frontline against Russia? Is it not already tearing itself in two?

Recognising the common history of the two countries is necessary for rational politics. Putin has argued Russia and Ukraine have a shared origin and have “spiritual, human and civilizational ties formed for centuries.”

That common ground does not mean it must be part of a shared state ruled by Moscow – any more than it does for, say, Belarus. However, it does make it impossible for Ukraine to develop as an ‘anti-Russia’ project. Putin correctly noted that the new authorities in Kiev seek to denounce and criminalize all aspects of the shared Soviet history, except for staking a claim to large historical Russian territories that were transferred to Ukraine. This mass of contradictions, Putin believes – as do many Ukrainians themselves – risks unravelling the country altogether.