Home / business / Putin has promised to exempt from tax the oligarchs, who returned to business in Russia

Putin has promised to exempt from tax the oligarchs, who returned to business in Russia 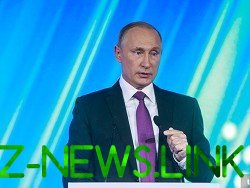 At the meeting with the legislators, Russian President Vladimir Putin has promised to release 13% tax those businesses that will put your business in Russia from abroad.

“There are still two proposals for returning capital to Russia. To extend the deadline of the Amnesty of capital, because sanctions are only a tendency to increase. Release of businesses that close their business abroad, from paying 13 per cent tax,” said the President at the meeting with deputies and senators, his words leads “Kommersant”.

Before the President’s speech this topic at the meeting raised the speaker of the state Duma Vyacheslav Volodin. He noted that the state Duma is ready to personally take part in the implementation of the proposal on the withdrawal of capital from Russian businessmen abroad. Volodin said that “the business would feel safe in Russia”, should adopt new legislation.

The initiative of the Russian leader was supported by the Russian Union of Industrialists and entrepreneurs (RSPP). In conversation with RT Deputy Chairman of the RSPP Committee for industrial policy Vladimir Rudashevsky said that currently business support is key. “Business is running at its own expense, to rely on it — it is the right move. A fair decision. With regard to the closure of enterprises abroad, we need to give credit to the team President. Sanctions worsen psychosis about Russian business is growing. If you consider that this will help entrepreneurs to leave without too much loss, then this is a very effective measure,” — said the representative of the RSPP.

Amnesty of capital, or a tax Amnesty was in effect from 1 July 2015 to 30 June 2016 and gave the right of Russian taxpayers to voluntarily declare their assets and accounts located in foreign jurisdictions. For this, entrepreneurs are exempted from criminal or administrative prosecution and from payment of taxes for previous periods, reminiscent of the TV channel 360.