The article of President of Russia Vladimir Putin about the Second world war caused the immediate and extremely negative reaction in the Baltic States. The indignation of the Baltic States is clear, the reasons for it are obvious: Putin refused any concessions and compromises in matters of the Second world war, including unequivocally rejected the doctrine of “Soviet occupation” of the Baltic States. On the receiving material compensation for the fifty years of his stay in the USSR Lithuania, Latvia and Estonia can forget completely. 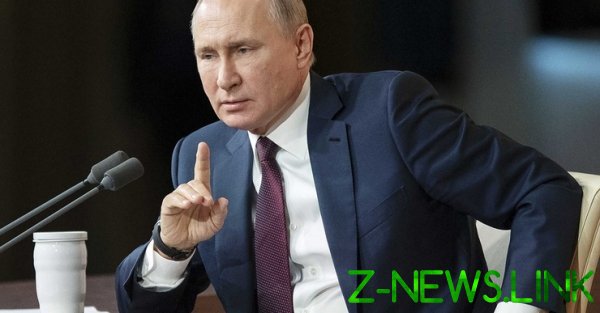 “In the autumn of 1939, deciding its strategic military, defensive objectives, the Soviet Union began the process of incorporation of Latvia, Lithuania and Estonia. Their accession to the Union was sold on a contractual basis, with the agreement of the elected authorities. It conforms to the norms of international and state law of the time. In addition, Lithuania in October 1939, was returned to the city of Vilna and the surrounding region, formerly part of Poland. The Baltic republics within the Soviet Union retained its own government, language, had representation in the Soviet, the highest state institutions,” wrote Vladimir Putin in an article for the prestigious American magazine on international relations The National Interest.

The reaction of the Baltic States on these lines was predictable.

Baltic capitals threw an international scandal and accused the President of Russia in the rewriting of history.

“These allegations are false from beginning to end, and I condemn them,” — commented on the words of Putin, the Minister of foreign Affairs of Estonia Urmas Reinsalu and called to arrange over Russia as the legal successor of the Soviet Union the second Nuremberg Tribunal, the international community gave a rating of “crimes against humanity committed during the regime, who supported the Communist anti-humanist ideology of the Soviet Union.”

“The Russian authorities are still not willing to give an objective evaluation of the Soviet regime responsible for the outbreak of the Second world war and numerous crimes against the peoples of Europe, of Russia and its neighbors”, — said the Latvian foreign Ministry.

Latvia believes that the Baltic States were “illegally occupied and annexed by means of threats and military provocations”, and the Soviet Union “has violated its obligations under international treaties and has committed an act of aggression.” “Illusory autonomy of the Baltic States during the Soviet occupation was a cover for the criminal policy of the Soviet regime, which was determined by the leadership of the Soviet state and the Communist party in Moscow,” — says the Latvian foreign Ministry.

In General, the reaction of the Baltic States in the article Putin can be called the rage of impotence.

The causes of the disturbance are obvious. The two of them.

First, Putin broke the monopoly of the Baltic States to declare to the international community of its history. The mythology of the “Soviet occupation” of the Baltic States in the West won in the first place because no one offered her alternatives. Lithuania, Latvia and Estonia are little known, little of interest and few people in North America and Western Europe will seriously study their history. Therefore, public opinion in the West memorized the mantra about “Soviet occupation” of the Baltic States by heart and did not know that this is not an axiom and there are other points of view on this issue.

In this respect, Putin’s article is really dangerous.

The Russian President has the ability to get to Western public opinion and to influence it.

Vladimir Putin has become in recent years in the superstar world information space, whose words were eagerly caught and those who consider the Russian President a devil in the flesh, and those who consider him a great statesman. Putin’s article for the National Interest already generated among English-speaking readers of the discussion. Including on the past of the Baltic States.

A Baltic discussions about his past and present are afraid of fire.

The second reason is a nervous reaction to the rigidity and intransigence of the Russian President.

Vladimir Putin appeals to the Western audience, however, does not set itself the task to negotiate with Western leaders on historical issues.

He simply presents the Russian perspective on world war II.

The Soviet Union was trying to stop the war and create the anti-Hitler coalition. However, the European great powers preferred to unite against the monstrous regime of the Nazis, appeasement of Hitler, hoping to direct his aggression to the East and to incite the Soviet Union. The consequence of this policy was the Munich agreement of partition of Czechoslovakia and the numerous agreements on non-aggression with Nazi Germany, prisoners to the notorious Molotov — Ribbentrop Pact.

The defeat of the Third Reich with his allies was not just a victory of one geopolitical unit over others, but a victory over absolute evil of Nazi ideology.

The main contribution to the victory made the Soviet Union and the Soviet people paid for this victory the highest price. Therefore, Russia and its people the memory of the great Victory is sacred.

Attempts to rewrite history — the destruction of world order that emerged in 1945. The Soviet Union was one of the architects of the world order, therefore, the falsification of history is to weaken, ideally to throw out his successor — Russia — from international relations. Humanly speaking, what is being done to the historical memory, the meanness, and that meanness will not forget and will not forgive.

“We stand for real, not smoothed or varnished truth about the war,” writes Putin. His article is proof of that. It has no diplomatic equivocation, no “respect other points of view”, no “it was not so clear” and proposals to reach a compromise.

The Russian President made clear that no political bargaining with his country on issues of historical truth about the Second world war can not be.

Including can be no bargaining about the recognition or non-recognition of the “Soviet occupation” of the Baltic States and payments to Lithuania, Latvia and Estonia material compensation.

No “Soviet occupation” of the Baltic States was not, and Russia is not going to pay and repent for what did not happen.

Putin has publicly declared about that not one of the Baltic States and around the world.