Putin for the fifth time to raise the economy of Russia 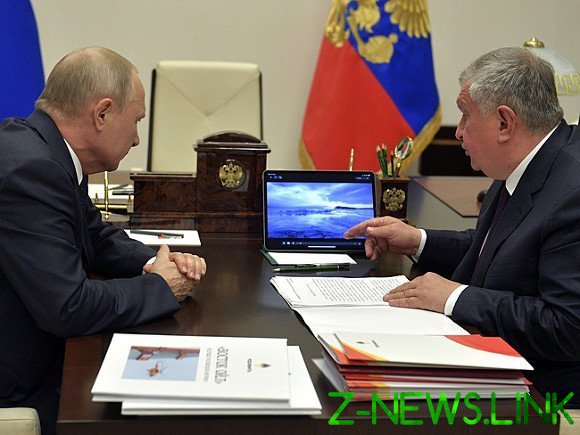 The great economic plans is an integral part of the twentieth. Although every time something prevented them to perform another project already in the writing.

Attentive listeners the latest speech of the leader has noticed that it is not about the abolition of the “holidays”. Putin tired to do komidom. And because of the weakening of the epidemic, not, to renew, modify or cancel the lockdown it provides the governors. And he wants to focus on more interesting things.

Subordinates are commanded “to proceed with the development of the national plan” whose purpose is “not only to establish a rhythm of business life, and to advance significantly in the achievement of national development goals, to ensure economic recovery with a new quality, at the expense of cardinal improvement of business climate and conditions for business, a deep structural change, creating effective, high-tech jobs in all sectors, launch large-scale investment projects…”

Anyone who remembers the instructions of Putin for more than twenty years of his reign, agree that to perform these points the leader demanded always. The permanent mode, fought for “radical improvement of the business climate.”

It has four great plan.

Exactly twenty years ago was adopted the “Strategy 2010”, compiled by the Center for strategic research, the head of which was then German Gref. In 2010, another head of the center for strategic research, Mikhail Dmitriev, has estimated that the outlines of this project in the field of modernization of economy are made by 35-40% in the social sector — 30%, and in the work of the civil service by 20%. And it was the most successful project of the Putin era. We can say, the only thing good.

The second program “Strategy 2020”, have been legalized before the end of the first calendar, in November 2008. Then raging crisis. The great plan was dropped by itself before it appeared signature and seal. So read today, this “strategy” as a literary work, but don’t look around trying to compare the written with what I see.

However, 2020 has continued to beckon. In 2012, Vladimir Putin published the “decrees of may”. It was his third plan, also nothing done.

One point Putin was repeated another year and a half: “By 2020, we need to create and upgrade 25 million jobs. This is a very ambitious and difficult task”. Then the President was distracted by other tasks, but as you can see, now I remember. “Creating an effective, high-tech jobs” will take its rightful place in a future plan # 5.

Let me remind you of the order that was still the plan No. 4 — “may decree”-2018, which solemnly proclaims the national projects. It is clear that in its initial form, they crossed the epidemic. And even the phrase “national project” is now used much less of the former. However, from this dream Putin refuses. Hence, the requirement to enter into future plan “the launch of large-scale investment projects.”

The repetition of the same slogans, repeated transferring them from one failed program to another are a prominent feature of the past twenty years. Agree, this loyalty once learned the words even impressive.

And this despite the fact that, unlike plan No. 1, executed at least in part, the following three were only the sound of years of stagnation. Even rostovskom reports, Russia’s GDP from 2008 to 2019, increased by only 10.1%. But real incomes in the past year was 7.4 percent lower than in 2013.

Although today it is remembered as a Golden age.

The center of the HSE estimates the decline in real disposable income in the second quarter of 2020 by 1.8 trillion rubles (21.8% against the level a year ago). All payments allocated by the authorities directly to the people, including the latest child benefits to offset the less than a third of these losses. In General, for the 2020 year CR HSE predicts a fall in the income of 8-12%.

The farther a thing of the past this last year fat, the more fatal it seems. Time and again, Putin’s system is trying to jump over the bar, given 2008, composes all sorts of plans, preparing to leap — and suffers another setback.

Is there any hope to restore the destroyed lockdown’s economy and even to get away from this sagovornika 2008?

Assuming that the epidemic will be more or less strangled that hope might be.

Our present economic status in many respects similar to that which occurred after the default of 1998.

As then, it was a lot of idle production capacity and a lot of unemployed, ready for a modest fee to take the vacant jobs. Up became a motor of the explosive economic growth achieved in addition, when cheap, as now, oil. For 1999 — 2000 Russia’s GDP grew by a record 15%. To this we must add the effect of the devaluation of the ruble (then strong, is now moderate), which increased the competitiveness of Russian goods on the domestic market and for export. Plus — the lack of pressure of external debt (then they just stopped paying, and now they are small).

The difference is one, but principled. The default became the latest in a series of blows to the living standards that have occurred since the early 1990s. In the current lockdown, the repetition of these attacks seemed to be pressed within two to three months.

But after 1998, the system unclenched his jaws and without money to support the citizens gave them the opportunity to take care of ourselves — to come to the old enterprises, to open new, find work, not caring about the formal side of things.

She didn’t provide them with such force services control and Supervisory services. And, most importantly, almost squeezed from the common people of money to feed magnates. So first posledenie years and even in the next few years, ordinary Russians got a real share of the growing prosperity of the country. And somewhere to the 2008 mu they even began to think that the hard times are over.

What prevents to do it now? Prevents putinomics, the expression of which are successive Grand plans. Failure to control their numbers, they are extremely successful in choking all living things.

In 1999, neither workers nor firms are not covered by the reporting from all sides. Hand of crime was strangling is not so thoughtlessly as the hand of the verifier. And it was not welded community of tycoons, ready to nail any money that gets from the citizens. Then it was not necessary, say, to bail out Rosneft at the public expense. And now will have to save and gozillionaire, and “investment projects” and arms programme, which the leader promised to leave untouched, and all administrative supercar, feeding from the citizens. All the points written in plan # 5.

Here and restore these stones on the neck of the shattered economy. Still, the epidemic is unclear when it will recede. And already built all of the planned recipients, is scheduled to squeezing of the common people.