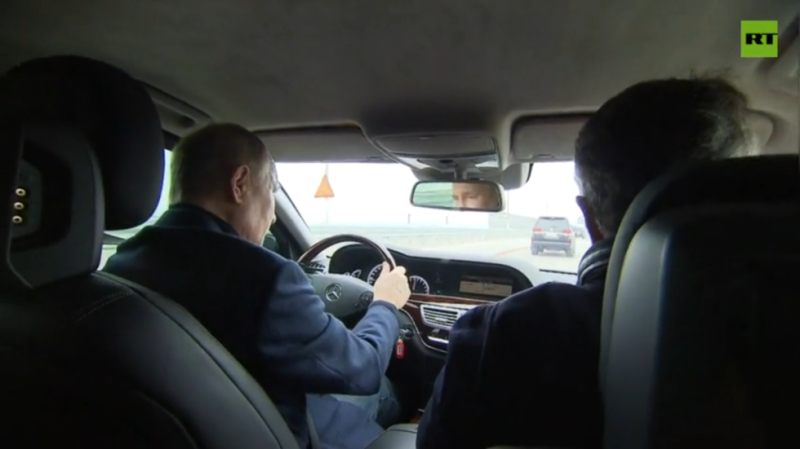 President Vladimir Putin visited the Crimean Bridge on Monday, meeting construction workers and driving over its restored section. The bridge links the peninsula to mainland Russia and was damaged in a terrorist attack in early October. It has been undergoing repairs since then.

Putin drove a car over the restored part of the bridge. Four sections of the construction were damaged in the attack, with some of them getting blown off into the sea.

Before visiting the bridge itself, the Russian president met with Deputy Prime Minister Marat Khusnullin, who has been overseeing the repair work. Khusnullin told Putin the road section of the bridge has been restored.

The powerful blast rocked the bridge early on October 8, causing a partial collapse of the road section and setting a passing freight train on fire, as well as killing three civilians. The incident was widely celebrated in Ukraine, locked in a conflict with Russia since late February, with multiple top officials cheering the explosion.

Moscow has directly blamed Kiev, and Ukraine’s military intelligence in particular, for the incident, branding the explosion a “terrorist attack.” Ukrainian President Vladimir Zelensky has denied he ordered the bombing of the Crimean Bridge.

Moscow stated that the attack on the bridge was only the latest attempt by Ukraine to damage Russian civilian infrastructure. It prompted Russia to ramp up its bombing campaign against Ukraine, aiming at critical infrastructure and military targets.