Home / WORLD / Putin & Biden summit will delight media, but it won’t change anything… relations between Russia & US are being slowly dismantled

Putin & Biden summit will delight media, but it won’t change anything… relations between Russia & US are being slowly dismantled 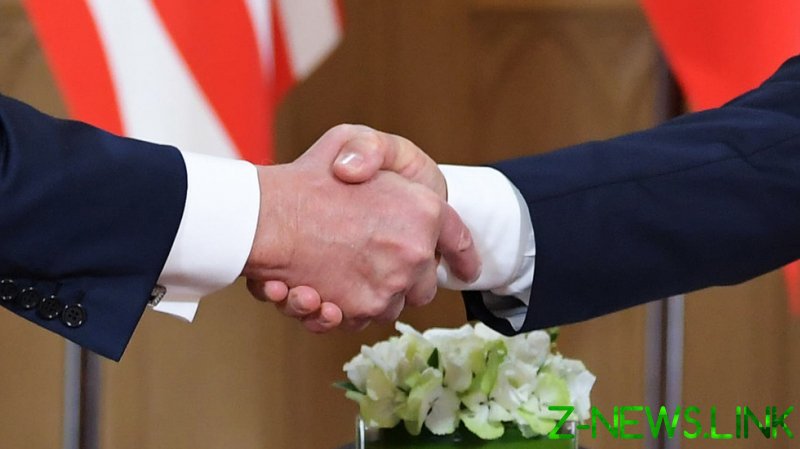 Russian-American relations have gone through some interesting curves on the road recently, leaving many commentators at a loss. Stern warnings, a military showdown, reported plans to deploy the US Navy to the Black Sea (subsequently apparently cancelled), President Joe Biden calling his Russian counterpart Vladimir Putin and proposing a face-to-face summit, followed by a new round of sanctions that apparently could have been worse but would do for now.

Next came Biden’s executive order that focused on the growing Russia “threat,” and then another invitation to talk in an address that Washington viewed as a gesture of reconciliation.

All of this, and in such a short time, does seem chaotic. However, we will get some clarity if we consider two factors. First, what we are witnessing right now is the final stage in the process of dismantling relations between Russia and the US as they have existed for several decades.

Second, most international players’ actions are motivated by complex domestic issues. Reacting to the challenges facing them on the home front always takes precedence, while foreign policy is either a secondary matter, or, if they are dealing with a major power that wouldn’t remove itself from the arena, it becomes an instrument for solving internal problems.

Let’s begin with the first factor. Since the late 1940s, Moscow and Washington have been each other’s main conversation focus. The dialogue has been confrontational in nature but pivotal for the global political landscape.

It once was at the center of everything, because the two powers engaged in it had equal military and political capabilities. During the Cold War years, the parties worked out an efficient, functional system of stabilizing and rationalizing the confrontation. In the 1990s, parity disappeared in many areas – except nuclear capabilities. But it wasn’t enough for maintaining the core elements of the former type of relations – neither in their essential aspects, nor in ritualistic ones.

Significant advances were made at the end of the 20th and beginning of the 21st century, such as mutual openness or political and humanitarian contacts, but they didn’t change the nature of the relations. The two countries stayed rivals, but now with drastically different levels of power and resources. And as disagreements grew, the openness started evolving into a disadvantage.

We are not going to analyze here what went wrong or discuss the very possibility of things developing differently. Today, Russia and the USA do not see each other as key partners – even in confrontational engagement. Each country views the other as more of a nuisance, getting in the way of executing their strategy. During the previous Cold War years, there was some mutual respect between the Soviet Union and America, as each country recognized its opponent’s ideological and political legitimacy. It is gone now.

Both now see the other side as a nation headed towards its fall, for different reasons. Moscow views Washington as an empire in decline, no longer dominant in the same way as the past few decades. Meanwhile, the Americans believe the Russian state itself is eventually headed for irrelevance.

This means each has lost the moral and political right to behave in the way it has been, in the eyes of the other. There is no sense in seriously discussing mutual interests, even in specific areas.

The second factor is the internal dynamics. The lack of self-confidence and unease about the future is felt everywhere. This is understandable, considering the chaotic nature of recent developments across the globe. At this point, no country boasts a clear or balanced development strategy; policies are made on the spot, and often impulsively.

Therefore, there are many neurotic moves. The world is a lot more integrated than it was during the previous Cold War era, so this neuroticism spreads quickly.

As a result, everybody’s behavior is determined by their very narrow understanding of self-preservation. Not in a general context, like amid fears that a cold war could turn into a real one, but in a sense that uncertainty forces nations to prioritize domestic issues, focus on internal stability, and make foreign policy serve this objective. External reaction is not taken into account.

This is clearly affecting relations between Washington and Moscow. And we see a number of steps that cannot be easily interpreted in one way or another. American experts view Joseph Biden’s address delivered last Thursday as a constructive move. They say that Biden had to finish what the previous administration started; he had to get closure and punish Russia for its perceived actions.

And now that it’s all done, he is offering to start a new page. However, he also signed an executive order that makes it easier to introduce new sanctions, so that next time America can save time and resources. Naturally, Moscow sees this as a signal that the same thing will be written on the new page – but this time, with more ink and words. When Russia reacts, the US calls it an escalation – this is not a response, it’s a new round.

When the Russian foreign minister recommends that the US ambassador go back voluntarily and hold consultations in Washington, we can assume that there is deep displeasure, and the ambassador is considered persona non grata at this point.

Further limitations on the work of diplomats – both quantitative and qualitative – also reflect the Cold War-like state of affairs. If political ties are next to nothing and the economic cooperation has never been very strong, then why would you need so many embassy employees? Especially considering the fact that their efforts to represent their nation in the country where they are stationed draw suspicion and are often interpreted as illegitimate attempts to influence something.

This works both ways – Russian diplomats in America and American diplomats in Russia find themselves in the same situation. Therefore, diplomatic measures just follow the overall political atmosphere.

In light of this, it’s weird to see journalists and experts speculating about whether or not the summit Biden has proposed will take place. It seems that many people believe that a summit between two heavyweights will magically solve something. Even back when policies were more structured, a top-level meeting required extensive preparation and was only held when it would bring results.

At this point, Russia and the US have hardly anything to discuss, except what is nicely dubbed “deconflicting” (i.e. Syria and Ukraine), which is actually the military officials’ domain – and they’re working on it themselves, anyway. Even the go-to subject – strategic stability – is now in limbo, because the previous framework is gone, and working out a new one would require a serious intellectual effort and joining forces to create something that would reflect the current international and technological realities. To do that kind of work, there has to be some enthusiasm and at least basic trust, and we have neither.

We’ve already seen summits where counterparts look each other in the eye to decipher some hidden meaning, and nothing ever comes out of them. Besides, there is no need for the current leaders of Russia and the US to get to know each other, as they’ve known each other for a long time.

Conceptually, the framework for our relations has been set by the US and it follows Biden’s formula of “walking and chewing gum at the same time.” It means working together with Russia when it suits the US, and ignoring or deterring it in any other areas. Washington believes that for any country, cooperating with America trumps any other concerns, so regardless of the conditions and restrictions imposed by the US, their partner will continue cooperating with them on whatever issues the US suggests working on.

This is the idea of the “indispensable nation,” as Madeleine Albright put it in the 1990s. Up until now, that’s pretty much how it’s been. Now Russia has to decide whether or not it’s willing to continue working within the “selective engagement” framework, which of course isn’t Biden’s creation and has been in place for much of the post-Soviet time. The current state of our relations proves that in this case, it leads to a dead end.

Apart from the reasons having to do with prestige and self-respect, there is one more factor. For a long time, this approach the US maintained could be justified by the fact that the US did have decisive global influence. Now, however, US leadership is in crisis both politically and, more importantly, ethically, while in terms of economy China’s growth is much more impressive. Washington obviously enjoys a big technological advantage and a monopoly in the financial sector, but it’s been increasingly using that to deter and punish competitors, both in geopolitics and commerce. So it’s not doing the reputation of America any favors, instead stimulating the search for new ways to avoid US-created obstacles.

Russian-American relations are currently deeply in crisis, and while you could look for the reasons why in this or that action, that’s not where the roots of the problem are. The previous framework was the product of the Cold War, and in its waning form it has lasted for three further decades.

However, bringing back the spirit of the Cold War won’t bring back its parameters. The world has changed, and the architecture of the relationships in it is nothing like back then, even though there are some elements of the past.

The attempts of Biden’s administration to recreate the old pattern of “free world” versus “aggressive tyrannies” are doomed to fail, because neither exists in its previous clear-cut form. In a sense, we should help Washington and respond by developing closer and more sophisticated ties between Russia and China, especially since the latter is shocked by how Biden and his team have chosen to handle US relations with Beijing.

Minimizing the risks of unnecessary confrontations and diligently working on withstanding any kind of pressure is the main track for the Russian-US relations in the near future. Working together should be limited to very specific and practical concerns, if they arise. At some point, there will be demand for a new type of relationship. That’s when we should start talking about it, and not a minute earlier.