Home / WORLD / Putin and Erdogan are all smiles in Sochi, but leave summit without press conference

Putin and Erdogan are all smiles in Sochi, but leave summit without press conference 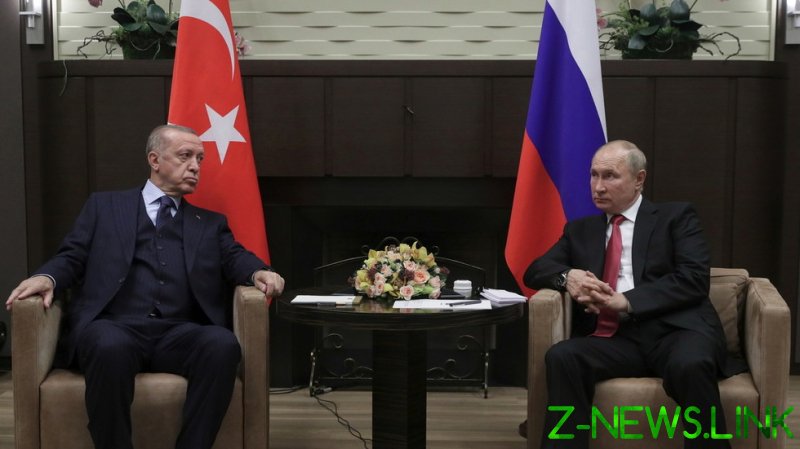 The summit was hotly anticipated as Russia and Turkey appeared at odds over the current situation in Syria’s Idlib province, and following Erdogan’s speech at last week’s UN General Assembly calling Crimea a part of Ukraine “whose annexation we do not recognize.”

Its results, however, remain veiled in mystery as the two presidents did not address the media after their talks. Erdogan tweeted on Wednesday evening that he left Sochi “after a fruitful meeting” with Putin.

Meanwhile, the Kremlin posted a photo with the two presidents smiling and shaking hands, along with a transcript of their opening remarks ahead of the summit.

According to the transcript, Putin was “delighted that our relations continue to develop and are progressing in a positive manner” and said Russia and Turkey were “cooperating quite successfully on the international stage, including on Syria” and Libya.

Putin pointed out that the Russo-Turkish trade has recovered from the drop early on in the Covid-19 pandemic and “surged ahead” by 30% since, and thanked Erdogan on the “consistent stand” regarding the TurkStream gas pipeline.

According to the same transcript, Erdogan called Putin a “dear friend” and said he was happy to meet him in person.The Turkish president thanked Russia for assistance with forest fires over the summer – and expressed condolences to the families of five service members killed in the plane crash in August as part of that effort.

Erdogan also thanked Putin for the massive number of Russian tourists that visited Turkey over the summer, acknowledging their role in bolstering the pandemic-stricken industry. Both leaders brought up Rosatom’s work at building the nuclear power plant at Akkuyu, on Turkey’s southern coast.

The Turkish leader did bring up the UN General Assembly session, saying that “some people asked certain questions” during it, and “We provided the necessary answers, because some of our plans have been fulfilled in this respect and cannot be reversed.”

The Sochi summit was Putin’s first in-person meeting with another head of state after he went into self-isolation in mid-September, citing a Covid-19 outbreak among the Kremlin staff. At one point, the two leaders stepped outside the Bocharov Ruchey palace and chatted about their vaccination status and antibody levels.

Erdogan could be heard saying Putin’s antibody level was “too low” and his was “over 1,000,” prompting the Russian leader to say they measured things differently.

Putin urged Erdogan to get a booster shot of Sputnik V, the Russian-developed coronavirus vaccine, but the Turkish president demurred, saying he already received the third shot of a different brand instead.