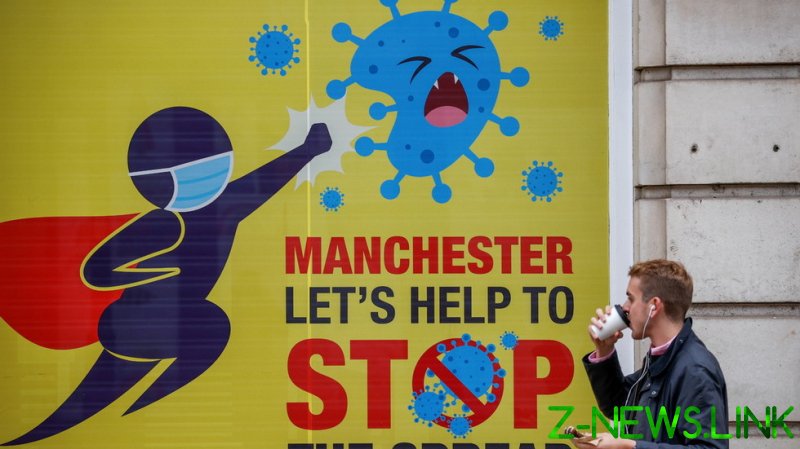 Gove told Sky News’ Sophy Ridge that “the political leadership in Greater Manchester is resisting precisely the program that would bring the virus down.”

I want to reach an agreement with the political leadership in Greater Manchester. I want them to put aside, for a moment, some of the political positioning that they’ve indulged in.

Gove called for more robust action against Covid-19 “instead of press conferences and posturing.”

His comments came after Greater Manchester Mayor Andy Burnham openly blasted the three-tier system of local lockdowns unveiled by Prime Minister Boris Johnson on Monday. He argued that the government was treating the northern regions as “the canaries in the coal mine for an experimental regional lockdown strategy.” As Greater Manchester is under a threat to be put on Tier 3 level, the government should offer “a proper compensation scheme” to the people and businesses affected by the closures, the mayor stated.

Burnham’s stance prompted a harsh response from officials in London, with Foreign Secretary Dominic Raab saying that the mayor was trying to “hold the government over a barrel.” Burnham, however, told BBC’s Andrew Marr on Sunday that he rejects the accusations of “playing politics.” He said he wants the government to “come together and agree [on] a package of support that helps people through this.”

A punishing lockdown without support, trapping places in Tier 3 all winter, I think, will cause real harm to the health in the broadest possible sense.

Gove, meanwhile, said that the government is ready to “work together” with Greater Manchester, but stressed that it is ultimately “better for the economy” to act quickly against the virus. “It’s a false argument to say that time spent on resisting these measures is somehow fighting for Greater Manchester’s economy, for jobs and livelihoods. It’s not. It is time wasted, when we should be taking the appropriate measures to protect public health,” he said.

Britain was forced to introduce tougher restrictions as the Covid-19 infection rate began to spike in recent months.