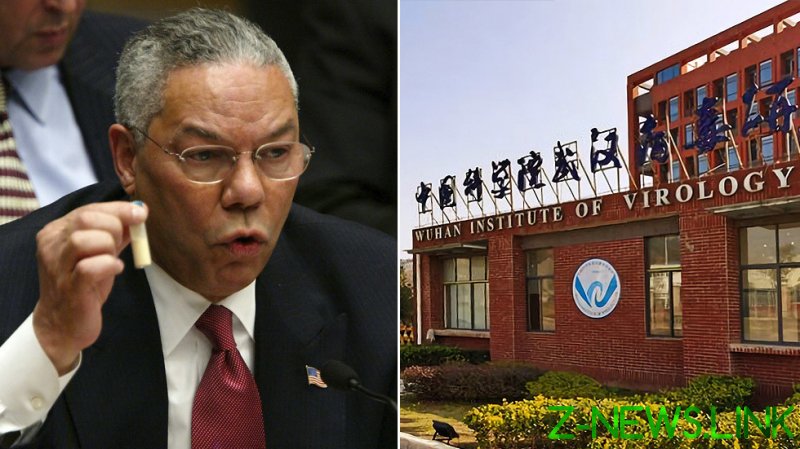 The origin of Covid-19 is a subject of scientific inquiry that should not be politicized, embassy spokesman Liu Pengyu tweeted, adding: “The campaign to politicize the study of origins and smear China is no different from the lies about Iraq possessing weapons of mass destruction (WMD) 12 years ago.”

The diplomat was apparently referring to the ‘lab leak theory’, a hypothesis that the pathogen causing Covid-19 did not emerge naturally but was rather a product of gain-of-function experiments at a virus laboratory in Wuhan, China. The virus managed to escape the lab, starting the devastating pandemic, supporters of the theory believe.

This origin hypothesis was favored by former US President Donald Trump and his administration. The Trump-hostile US press treated it at the time as a conspiracy theory, while Silicon Valley censors worked to eradicate it from US-based social media, labeling it as misinformation about Covid-19.

Both, however, made a U-turn after the Biden administration gave credence to the claims by ordering the US intelligence community in late May to produce a report on the issue. Western news outlets have been publishing piece after piece explaining how the theory actually seems credible. The body of circumstantial evidence in favor of the lab leak claim remains mostly unchanged since the Trump era, though occasionally some additional inconclusive puzzle pieces are added.

Last Sunday, the Wall Street Journal published an article arguing that the genome of the SARS-CoV-2 virus carries clear markers of splicing – meaning it had been produced in a lab – which for some reason had not been considered a smoking gun before.

“Proponents of zoonotic origin must explain why the novel coronavirus, when it mutated or recombined, happened to pick its least favorite combination [of genes]. Why did it replicate the choice the lab’s gain-of-function researchers would have made?” the opinion piece penned by physician Steven Quay and professor of physics Richard Muller said.

The claim that Saddam Hussein possessed a clandestine advanced WMD program and posed an imminent threat to Europe was used by the Bush administration to justify the 2003 invasion of Iraq. The accusations, which were later proven false, were endorsed uncritically and enthusiastically by the US media establishment. It is now widely considered a defining failure of the institution that is supposed to keep politicians in check by digging for the truth.

Many people have called the treatment of the lab leak theory this generation’s ‘Iraqi WMDs moment’, though not all of them see it the way Beijing does. Some believe the failure was in dismissing the claim in the first place just because journalists loathed President Trump so much and everything he did or said.

Adding to the complexity of the situation is the fact that the gain-of-function research conducted in the Wuhan Institute of Virology was funded by US taxpayer money. Some of it came from the National Institute of Allergy and Infectious Diseases (NIAID), which is headed by Anthony Fauci, the top epidemic adviser to both the Trump and the Biden administrations.

This type of research, which is aimed at producing dangerous strains of infections in a lab and finding ways to counter them before they can emerge naturally, has been conducted in several countries. Some experts consider it highly dangerous because of the potential for accidental release or even bioterrorism. Fauci was elevated to the status of national hero in the US by the same media which worked hard to bury the lab leak theory.

The origin of Covid-19 was investigated by the World Health Organization (WHO), which said the lab leak theory was not backed by much evidence and that natural evolution was more plausible. Proponents of the theory believe that China obstructed the investigation and pressured WHO investigators to produce an exculpatory report.