Published trailer of Metal Gear Survive about the basics of survival 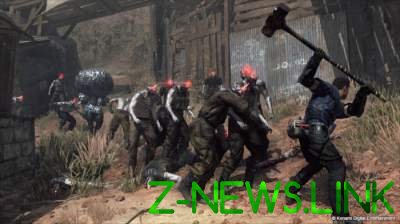 Konami has once again confirmed: single player and multiplayer are closely related.

Metal Gear Survive you can play not only in society, but also in splendid isolation. Konami has shown how the single player in the game and what it can do.

According to the plot of Metal Gear Survive, in the ending of Ground Zeroes in the sky appeared a portal, which sucked the remnants of the exploded Main base. The protagonist managed to escape this fate. However, six months later, a mysterious organization sends the hero into an alternate reality.

The first thing we come to a slight strengthening, which is located near the base of Ground Zeroes. To survive, you must gather food, water and resources. From materials to design useful things for their new home. Crafting requires recipes: something you can bring yourself experimentally, but the most powerful drawings are issued for successful completion of the assignments in multiplayer.

The border base closes poisonous fog: to get started, you must create a container with oxygen and to wear a mask. But if the oxygen runs out, you will die.

Periodically in the outside world opens up new portals of which fall out materials, and even people from different places and time periods. For example, the video shows the nurse, whose face is suspiciously reminiscent of the Quiet from Metal Gear Solid V: The Phantom Pain. The people you save, you can assign to your team, and thus faster to develop your base.

Finally, Konami has once again confirmed: single player and multiplayer are closely related, so you can use in one mode resources that are procured in another.

If you still don’t believe that Konami is doing something interesting, you’ll have the chance to check out Metal Gear Survive independently. From 18 to 21 January will be an open beta test on PlayStation 4 and Xbox One. PC is not mentioned.

But the release date of Metal Gear Survive all the same: 20 Feb 2018 on three major platforms.