Published touching footage of the meeting released from captivity of Ukrainians in luck. Video 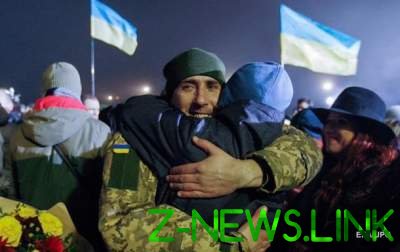 In the city of Lutsk returned soldiers of the ATO Artem Vindyuk and Mr Gison, who was recently released from captivity of fighters on Donbass.

About a hundred citizens met released at the theatre square with flowers and shouts of “Heroes!”.

Vindyuk has been held in captivity for more than a year, and Gizon was a prisoner for about two years. According to the soldiers, they were sent to clear the debris of the Donetsk airport, where they had to get the bodies of their colleagues. For refusing to work militants brutally beat them.

According to Viduka, he has not healed the wounds, but the most important thing for him – he returned home.

“Got there a little bit. Stayed “Bandera”, as they say to us,” admitted the fighter.

In turn, Gison said that before releasing into his cell and came after 10 p.m. and forced to write a statement that he was not beaten. When he learned that his luck on the exchange, up all night and prayed.