Published statistics of sales of computer games for the last month 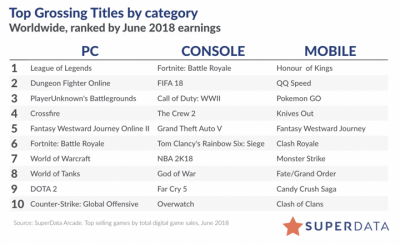 According to experts, last month on all platforms has been spent around 9.1 billion U.S. dollars.

Analytical resource SuperData Research has published a new batch of statistics on video game sales. According to experts, last month on all platforms has been spent around 9.1 billion U.S. dollars. 15% more than in June 2017, with the main growth of 23% occurred in the mobile segment and the console and gaming market on the PC even dipped slightly compared to the same period last year.

Substantial profits received by the creators of the popular “battle Royale” PlayerUnknown”s Battlegrounds. Last month the cost PUBG when Steam was reduced from $30 to $20 (474 hryvnia in the Ukrainian segment). Due to this in June, it sold 4.7 million copies of the game, and overall the PC sales exceeded 50 million Is almost a record, more money for one reporting month the game was brought in October 2017.

As for the overall rating of profitability, PlayerUnknown”s Battlegrounds holds third place on the PC, behind Dungeon Fighter Online and League of Legends. The main competitor PUBG in the genre “battle Royal” — Fortnite: Battle Royale is situated on the sixth place in the list of best-selling games for the PC and was able to climb to the top of the gaming consoles. A fantastic result considering the shareware distribution model of the project.

Finally, note hit the top ten of many favorite Patriotic gamers arcade tank simulator World of Tanks, as well as two former leaders of the DOTA 2 and Counter-Strike: Global Offensive.