Published render and specifications of the smartphone OnePlus 5T

A few days before the announcement of the smartphone OnePlus 5T fully merged into the network: the first was terrible quality live shots, yesterday he appeared on the teaser, and today one of the partners OnePlus has posted the press render and the list of specs of the new flagship. Well, at the presentation of the smartphone surprises now will not be exact. 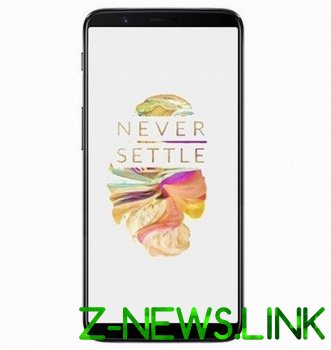 New OnePlus 5T on the render looks exactly the same as on the teaser image, and in sale it will arrive before the end of this year, yet no exact date of release. The price of the device is already known: if you make him a pre-order, it will be only $ 550 for the version with 6 GB RAM and 64 GB ROM, and the cost model 8+128 GB will be known later.

From the point of view of filling the new OnePlus 5T, as expected, OnePlus copies 5 for all, except for the screen, that is, we expect Qualcomm 835б battery on 3450 mAh battery and dual camera from Sony with 20 and 16 MP. Promise to change the frontalka 16-megapixel sensor Sony IMX371, but this is at the level of rumors. As for the screen, it is almost edge-to-edge AMOLED panel with an aspect ratio of 18:9, as is now fashionable, and it will be 2160х1080 pixels or Full HD+ with a diagonal of 6 inches. The smartphone will weigh 165 grams with dimensions 157х75х7 millimeters.