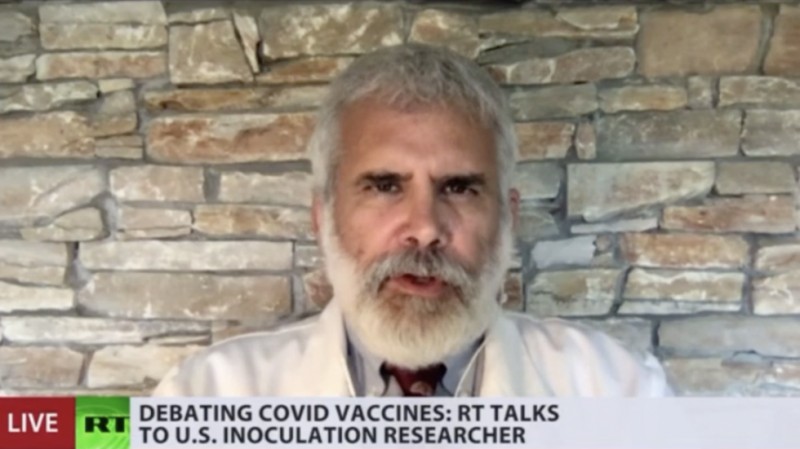 “The same mistakes keep getting made again and again,” Malone told RT in an interview on Thursday. The fundamental error, he explained, is that the public health community is structured to make decisions by consensus, so it is slow to react to data and is always 4-6 months behind the curve – instead of looking forward and adapting based on new information.

Public policy has also been distorted by the “totally inappropriate” involvement by wealthy sponsors such as the Bill & Melinda Gates Foundation, he added.

Malone has been involved in vaccine development for decades, and was among the scientists who developed mRNA technology, which is now used by the Moderna and Pfizer-BioNTech Covid-19 vaccines in the US. He has run afoul of the medical establishment during the coronavirus pandemic, however, for looking at possible treatments and opposing vaccination mandates.

“It’s the obligation of the world health community to provide clear, transparent, compelling evidence in favor of the vaccine product uptake in the relevant groups. It’s not their job to provide mandates,” he said.

Attempts to mandate the jabs are actually fueling vaccine hesitancy among the people in high-risk groups who need to take them, he argued. There is compelling evidence that vaccination benefits the elderly, the morbidly obese, the immunocompromised and other high-risk categories, Malone told RT.

Traditionally, public health authorities in the US stratify the risk-benefit ratio by age groups and categories. That ratio currently “does not support vaccination” with mRNA jabs for young adults and children, Malone argued, because “there’s no question that the [Pfizer] vaccine has an association with myocarditis and pericarditis in adolescents, particularly in young men but also in young girls.”

“The problem is that we’ve been told we’re all at high risk for the disease and death associated with this virus. There’s no gentle way to put it: That is a lie,” Malone said, noting that Covid-19 most affects the elderly and the obese. He pointed to the fact that “emerging economies” and African countries – where obesity isn’t as widespread as in the industrialized nations of the West – have a lower incidence of severe cases and deaths.

Scientists have struggled to explain the data from Africa, suggesting lack of testing or increased immunity from other diseases as possible explanations. The vaccination rate on the continent was less than 2% as of July 2021, and while cases and deaths surged at the time, they still lag behind Western nations.

Malonesays he supports what the World Health Organization and Western governments have termed ‘vaccine equity’, in the sense that the elderly and the vulnerable need to be prioritized.

“We should have more vaccine equity in terms of making products available to the [elderly] in particular,” Malone told RT. “The elders are the institutional memory, essentially. They’re the memory and the wisdom in communities as small as local villages and up to national governments.”

Instead, however, the governments around the world are trying to mandate vaccinations for everyone, including pregnant women. There is simply no data on the safety of this, one way or another, Malone said.

Historically, vaccinations in pregnancy are not recommended until there is “clear and convincing data” that they are safe, according to Malone. Yet the Centers for Disease Control and Prevention (CDC) in the US issued a recommendation first.

“We don’t have the data, there was a recommendation made in the absence of data, and the studies to determine the data” were launched after the CDC announcement, “which as a scientist and a physician I find upside down,” he said.

The CDC recommendations from August 2021 cite a non-peer-reviewed study involving 2,456 “pregnant persons” enrolled in a “voluntary smartphone-based surveillance system,” who were vaccinated with mRNA vaccines. It found that the cumulative risk of miscarriage in that group was 12.8%, which the CDC said was “similar to the expected” 11-16% rate in the general population.

Malone’s criticism of the government response to Covid-19 has made him a target of what he calls “character assassination,” with the media labeling him an ‘anti-vaxxer’, a purveyor of ‘health misinformation’, and worse.

“This is a classic Western media strategy to delegitimize people that are not complying with the dominant narrative,” he said. “I have consistently spoken in favor of vaccination of high-risk groups. I’ve never wavered from that position.”

He also says he took the Moderna vaccine early on, after having ‘Long Covid’, and has been frank about the side effects he suffered.