Home / WORLD / Psst! Sorry not sorry: Amazon apologizes to congressman it dumped on for tweeting about Amazon workers pissing in bottles

Psst! Sorry not sorry: Amazon apologizes to congressman it dumped on for tweeting about Amazon workers pissing in bottles 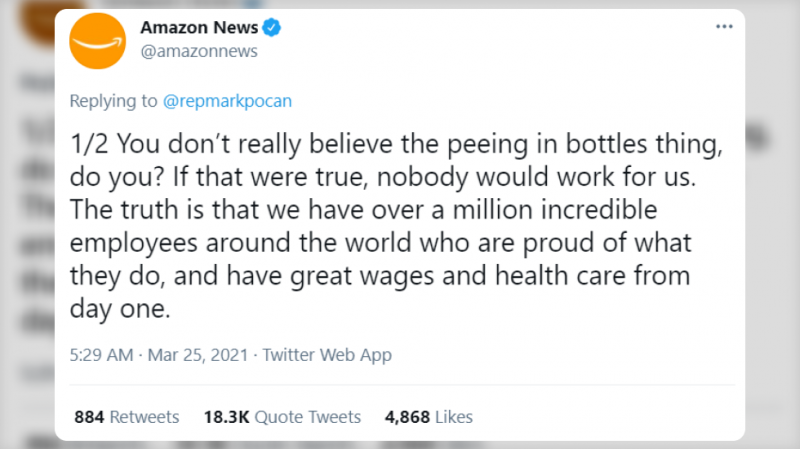 Last week, Amazon’s official Twitter account went after Representative Mark Pocan (D-WI), after he brought up the urination issue in a debate over minimum wage. “You don’t really believe the peeing in bottles thing, do you? If that were true, nobody would work for us,” Amazon responded, before touting itself as a wonderful employer.

The condescending reproach instantly backfired, as angry commenters accused the company of gaslighting about its working conditions. On Friday evening, just as the nation was preparing for the Easter weekend, Amazon published an apology – to Pocan, not its workers or the general public – for posting a tweet that was “incorrect” and “did not receive proper scrutiny.”

The company said the pee-in-a-bottle issue indeed was a problem for its drivers, but stated that the challenge of adequate bathroom breaks was industry-wide.

“Regardless of the fact that this is industry-wide, we would like to solve it. We don’t yet know how, but will look for solutions,” the blog post said, before concluding with links and random tweets about cases of workers at other companies – including Uber, UPS, and DPD – who also allegedly had to pee in bottles.

One of the tweets Amazon embedded at the end of the blog post accused The Intercept – which has been at the forefront of coverage of Amazon worker complaints – of being “a clickbait scam site.”

The statement implied that Amazon workers urinate in bottles only when there are no restrooms around, which was not the case for its order fulfillment centers. It didn’t address media reports to the contrary, which say some Amazon warehouse employees are hesitant to take a break due to how the company clocks working hours and punishes underperformers.

The intended recipient of the apology apparently was not convinced by it. “This is not about me, this is about your workers—who you don’t treat with enough respect or dignity,” Pocan tweeted.

Amazon’s Twitter account seems to have taken a more combative approach to public engagement of late. Last week, the e-retailer and tech giant also clashed with Senator Elizabeth Warren (D-MA), after she accused it of exploiting loopholes and tax havens under laws that came into being with the help of “armies of lawyers and lobbyists” working for Amazon. The company is reportedly the second-largest corporate lobbyist in the US after Facebook.

The damage to Amazon’s image that was sustained due to the account’s postings reportedly prompted an engineer to flag it as possibly having been compromised by a hacker.

Amazon’s apology to Pocan comes amid an attempt by workers at its warehouse in Bessemer, Alabama, to unionize. A flood of pro-corporate, anti-union tweets has lately been evident on the platform, fueling speculation that the company has deployed bots to undermine their efforts. That said, at least some of the suspicious posts might actually have been penned by the real people employed by Amazon as “ambassadors.”