PSG in the French Cup finals and sensationally lost to “Rennes” 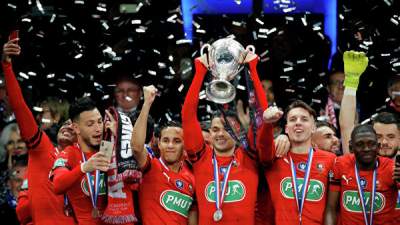 PSG for the first time in five years lost in the finals of the French Cup.

The decisive match against Stade Rennais FC began on the ideal scenario – already in the 21st minute after goals by Dani Alves and Neymar the team of Thomas Tuchel led 2:0. It seemed that the intrigue in the game is killed long before the final whistle, but Rennes thanks to an own goal back in the game, and in the second half, the underdogs evened the score and forced overtime.

In extra time the ball only by miracle has not appeared in collars “Rennes” – Mbappe, Cavani and Neymar failed to convert several 100% chances. Payback for the missed moments came on penalties – the goalkeeper of PSG’s Areola are not pulled out of any of the six strokes, and miss Nkunku made the “Bordeaux” winner of the Cup of France.

The Final Of The French Cup. Rennes – PSG. Game review: