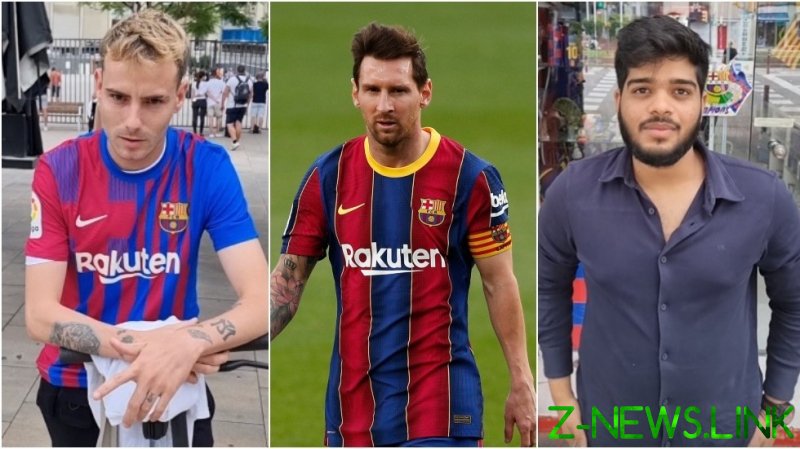 For those that come to the stadium from the suburbs, the signs of Barca’s financial decay are clear for all to see as soon as arriving at the city’s central station, Barcelona Sants.

The truth is that with debts rumored to exceed $1.4 billion, and perhaps far more than that as Laporta has already hinted, with last season’s losses stated to be $573 million alone, the Catalans cannot afford to keep their captain nor maintain a club shop which has now been shut down in the capital’s transport hub.

Changing to the Metro and getting off the blue line at Collblanc, fans that had come to give Laporta a piece of their mind were met with a fitting dark cloud and grey skies hanging over the 99,000 capacity stadium.

All attention was focused on the auditorium, where inside Laporta was fielding questions from the media in a grilling that lasted an hour and a half.

At one point leading chants that communicated as such, a fan brandished a frank banner that read: “F*ck you [La Liga president] Tebas, F*ck you PSG, Messi. stay.”

Sneaking out the back door, they could not tell Laporta what they thought about the developments, but chased his car down Carrer d’Arístides Maillol while just as likely to catch the vehicle as they are to see Messi wear the iconic Blaugrana number 10 shirt against Real Sociedad in their La Liga opener on August 15.

Anti-Tebas and PSG sentiment echoed by many of those in attendance, with Barca supporters known as Cules still feeling the weight of yesterday’s monumental announcement.

Ruben Martin, 24, was hit like a ton of bricks.

“It’s shocking. It’s not sunk in yet and I’m not sure it ever will. I feel an incredible sadness. I grew up watching him and if you’re a true Cule (Barca fan), then you can’t accept this loss.

“La Liga should be a little more flexible when it comes to players like him.

“I understand that everything has to be equal, but we’re talking about the best player in history here. They needed to be more flexible when it came to signing the contract.”

“He’s on the road to his seventh Ballon d’Or after winning the Copa America. The way he won the Champions League with Pep Guardiola and with Luis Enrique – it was the best football in the history of the game. He’ll always be the greatest.

“I don’t want him to see him at any other club except Barcelona. It was a perfect marriage.”

If pushed to choose, however, Martin would prefer to see Messi at Manchester City, to be reunited with Pep Guardiola, and described PSG as a “sh*t club”.

“I really hope he doesn’t go to Paris,” Martin began on this.

“I’d say City with Pep because of the style of play. He has to be with him for the next two years. Not with Neymar, or anybody else.

“That club [PSG] isn’t worth sh*t. They’re stupid and egocentric. Look at France with the team they had and they couldn’t win the Euros. They’re egotistical. When Barca win the league, they act as a family. It’s different. Sergio Ramos went there now, but PSG are just about money.

“City spent a lot of money too,” Martins noted. “But at least they have an identity and a style of play under Guardiola. It’s not ‘I’m Neymar, I’m the best’”.

“PSG for all the great players they have, they’ll always be Pre-Benjamins (kids that play from U7-8s in Spain).”

But even so, as much as it hurts, Martin thinks his club will be alright if they can steady the ship and return to their core values.

“Even though it’s the end of an era, I think Barca are a philosophy,” he said.

“Just like they had a generation with Xavi, Iniesta, Messi, another one will come. But will it come from players like Ousmane Dembele? No.

“We need players who know and share the club’s philosophy and attitude. Look at Pedri and the great season he had and how many games he played. It’s players like that which interest me, not those that cost 100 million. You end up losing the team and going through things like this today.”

Some could care less about Messi’s next European destination.

Wearing a shirt from his first club and brandishing a placard which declared: “Messi, Newell’s is your home”, Andres Garcia, 30, simply wishes that the six-time Ballon d’Or winner returns to their shared birthplace of Rosario.

“I believe that he’ll leave to another club and our hope is that it’s Newell’s [Old Boys],” he said.

Asked if Paris, where fellow NOB academy graduate Mauricio Pochettino manages PSG, is a more likely destination, he answered: “I don’t know, he has a lot of friends in Paris but the Financial Fair Play makes it difficult for him. Also, besides that, he has to take his family into account too these days.

“The truth is that everyone would like him to go to Newell’s in Argentina. For the people in Rosario [him returning] is the same dream we’ve always had. Just like he had since he was a little boy, to play for Newell’s. And for the Argentine people as well.”

Away from the football pitch, there is a knock-on economic impact for those who have businesses which rely on Messi’s name to bring in customers.

Already reeling from a full year and a half of fans not being able to attend the Camp Nou due to the pandemic, Mohammed Uzair, who runs the BCN Souvenir Shop a minute down the road from the ground fears further damage with Messi’s exit.

“Business is going to suffer a lot,” he predicted. “Because people come from other countries just for Messi, to see him in the stadium, to watch him play.

“It’s embarrassing that I have his products here but he’s leaving Barca. People aren’t going to buy them so we’ll lose a lot of money.”

“It’s possible that Messi fans will buy his old shirts. But now he’s gone they’ll start buying those of others. Maybe he’ll be back, I don’t know.”

With a certain Qatari-backed outfit reportedly closing in on the 34-year-old, and Chelsea now rumored to be in the race, that possibility seems further away than ever.

But stranger things have happened in the circus and psychodrama that modern-day FC Barcelona have become.