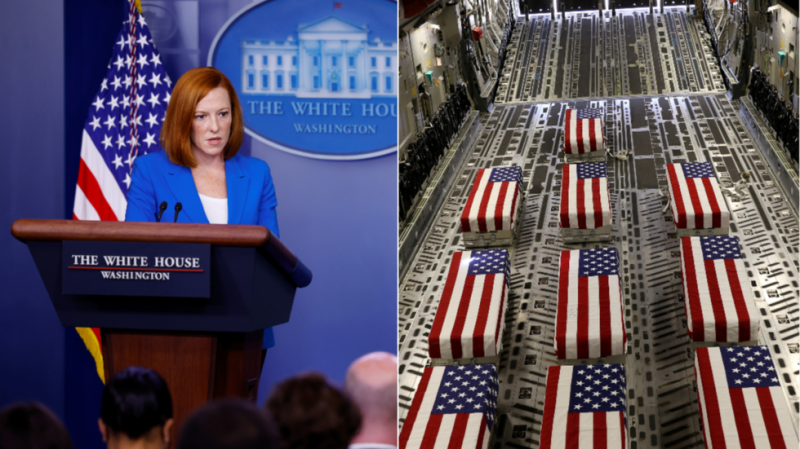 “The men and women who gave their lives… that doesn’t take the place of all of the progress, all of the work that’s been done to evacuate people,” Psaki said on Sunday in a press briefing. She added that the 13 fallen service members sacrificed their lives to save thousands of people, “and that is something that should be honored, should be valued, and we will continue to look for ways to do that.”

Author Andrew Pollack called the statement “shameful,” while he and other Twitter users puzzled over what great progress Psaki is claiming in a chaotic withdrawal that has left hundreds of people dead and billions of dollars in US military equipment in Taliban hands.

“Thirteen US service members are dead, the Taliban controls Afghanistan and ISIS-K is on the rise,” said Tommy Pigott, rapid response director for the Republican National Committee. “Yet, Psaki calls this progress? It didn’t have to be this way. The blood, chaos and death at the Kabul airport is on Biden.”

The administration’s handling of the withdrawal has drawn criticism from Democrats, too. Harrison Becker, a self-described “proud Georgia Democrat,” said Psaki’s statement missed the mark. “Yes, you guys made incredible progress, no doubt, but 13 Americans are well, dead, so, y’know…”

The press sectary’s dismissive comment came on the heels of Sunday’s “dignified transfer” ceremony at Dover Air Force Base in Delaware, where the caskets of the 13 fallen troops were carried past President Joe Biden, military leaders and family members of the deceased. Biden angered many Americans by apparently looking down at his watch to check the time during the solemn ceremony.

Critics, including members of Congress and parents of some of the Marines who were killed in Kabul, have blasted the administration for a withdrawal plan that unnecessarily put Americans in harm’s way. For instance, Marine Lt. Col. Stuart Scheller said evacuations could have been done more safely had the Pentagon not prematurely abandoned Bagram Airfield. He was relieved of duty less than 24 hours after posting a Facebook video criticizing the withdrawal.

But Psaki said the administration has saved the lives of 120,000 evacuees, including 6,000 Americans, by getting them out of Afghanistan. But she managed to anger more observers by saying Biden “knows firsthand” the grief that families of the fallen soldiers are suffering, alluding to the death of his son Beau Biden in 2015. The 46-year-old Beau Biden died of brain cancer, seven years after he deployed to Iraq as an Army lawyer.

“Jen Psaki just compared the Marines and Corpsmen that were killed at Kabul airport with Beau Biden’s death,” one commenter tweeted. “There is no level too low for this regime to go to deflect from this debacle.”