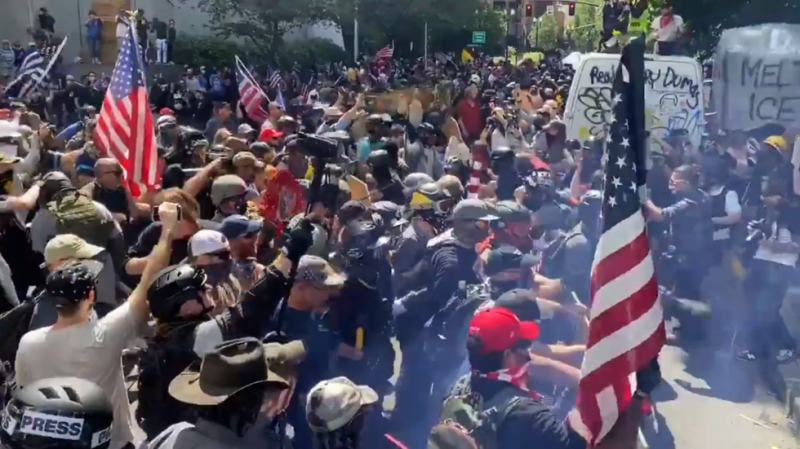 Proud Boys members gathered around the Justice Center in downtown Portland around noon on Saturday, some carrying rifles and others sporting shields that referenced conspiracy theories stemming from the controversial online group QAnon.

Other banners included statements in support of the president’s reelection campaign and against “Marxism.”

Antifa counterprotesters showed up shortly after and it did not take long for the two sides to move from screaming matches to physical violence in the street, with video showing paintballs, smoke canisters, and pepper spray being exchanged by the two clashing sides.

‘House of Cards’ creator and playwright Beau Willimon reported being on the side of the left-wing protesters and documented his experience through his Twitter account, which included getting hit with a paintball at one point. He reported the right-wing protesters were using bear spray and several people required medical attention from volunteers.

Conservative author Michelle Malkin praised the Proud Boys and “patriots” for “fighting back” against Antifa protesters.

Black Lives Matter protests have been ongoing in the city of Portland, with police repeatedly having to declare gatherings riots as demonstrators have clashed with officers, vandalized law enforcement buildings, and begun to move their efforts into residential neighborhoods.