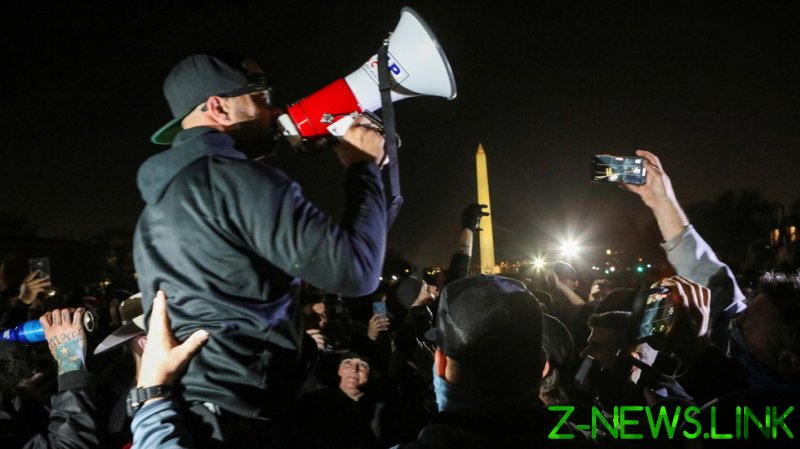 Tarrio was given 240 days in prison – 90 of them suspended – and a fine for the unlawful possession of the magazine, and another 60 days for destroying the banner. Judge Harold L. Cushenberry Jr. of DC Superior Court handed down the sentence on Monday.

He is expected to report to the same DC jail where the hundreds of people charged in the January 6 riot at the US Capitol are currently being held.

“This court must respect the right of any citizen to peacefully assemble, protest, and make his or her views known on issues,” Cushenberry said at the sentencing, according to CNN.

“But Mr. Tarrio’s conduct in these criminal cases vindicate none of these democratic values. Instead, Mr. Tarrio’s actions betrayed them.”

Tarrio “clearly, intentionally and proudly crossed the line from peaceful protest and assembly to dangerous and potentially violent criminal conduct,” the judge added.

The ‘Proud Boys’ chairman wasn’t actually in DC on January 6. He was arrested the day prior – at which point the police found the rifle magazines in his possession – for the alleged “hate crime” of setting the banner on fire during a demonstration in December, and ordered to leave the city.

At Monday’s sentencing hearing the pastor of the church from which Tarrio took the Black Lives Matter banner said that its burning “sparked feelings of hurt, anger, confusion.”

“I made a grave mistake,” Tarrio told the judge after that testimony, adding that he would “like to profusely apologize” for his actions, describing them as “wrong.”

That was quite a change from his statements back in December, when he admitted to being responsible for burning the sign. He said he didn’t do it out of hate but “out of love,” calling BLM “a racist movement that has terrorized the citizens of this country.”