Home / Society / Protests will be under the control of the Cossacks

Protests will be under the control of the Cossacks 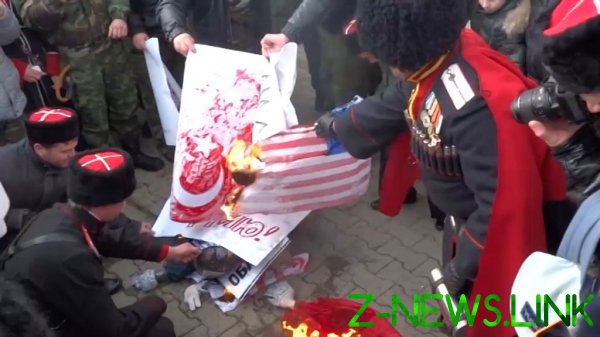 The last protest rally in Moscow passed without incidents from the Cossacks, the security forces though was catching up to the horror, however, was as far as possible correct.
Some of the detained were all released without any repercussions for several hours.

If there’s some merit to the Cossacks? And with whom they are real Cossacks, on whose side?

“The Cossacks will always be on the side of the people- says the First Deputy of the Council of Atamans of Russia, General FSK Gennady Kovalev- the people hurt won’t be with him, let him dare to raise hand against us.

This time the Council Leader sent out the Order for all of the Cossack societies, has informed the state authorities that all military action under the guise of Cossacks, it shares provocateur unrelated to us. These are going to apprehend and punish!

People should know whatever shocks occurred in Russia, the Cossacks are always on the side of the people, their backs close against Dubya and bullets.

I want to say that our Cossack counter-Intelligence, knows who the provocateurs are the sets of the Cossack form, and if they dare to organize provocations we, in spite of their high positions and posts will publish their names. The earth will burn under their feet!

This time, we put their patrols in the editorial offices, “Echo”, “Rain”, “Open media” and the other to ensure the safety of both parties.

We are well aware that these protests do not need anyone except the organizers, the people will not be better from someone that there is someone from the cohort of oligarchs will be allowed to vote.

Who does not put forward social demands, and is not going to distribute their wealth to the people.

However, fooled by provocateurs enough and we will protect them no matter what.

All of these simple will still continue and our knowledge increase.

We ask all participants who will witness the anti-people conduct charged in the Cossack form, to inform us by phone of the hot line service of the Cossack counter-Intelligence, or group in social networks in the VC, or of the territorial administration of the military commandant’s office or the FSB.

All these recent protest rallies showed that people do not care about the political showdown at the trough.

Think for yourself, those parties which did not allow for elections, presented the election Commission 75,000 signatures to protest for them it’s God forbid 3 000.

What does this mean? That nobody cares about them or that signatures are fake.

We understand that, but nevertheless let them to cover from their own provocateurs, in their kitchen are not going to climb, the Cossacks have traditionally kept away from politics – to people better.

People should not go for Yashin, Sable and Gudkov, and for their own freedom, constitutional and civil rights, and the opposition does not have its own position on these issues, just voicing thoughts Kasyanov and Gref.”