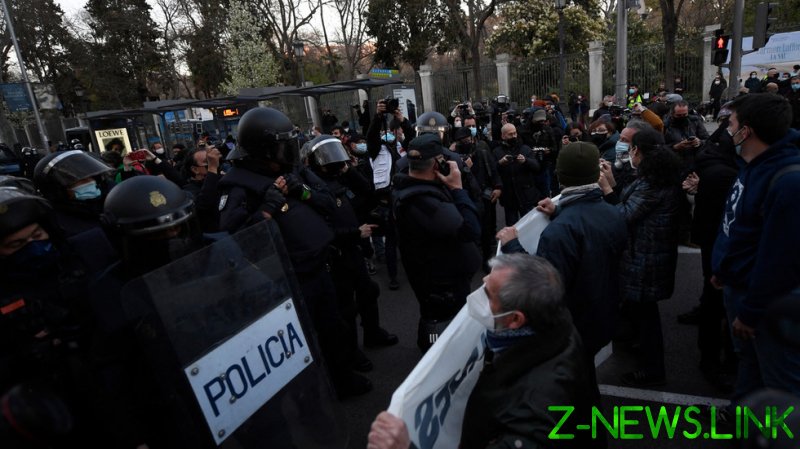 Hundreds of demonstrators marched through Madrid late on Saturday. The unauthorized rally was met by a large police force who blocked the protesters from advancing towards the center of the city.

While local media estimated that there were 300 people there, footage from the scene suggests the numbers were higher. The protesters called for Hasel’s release and for other “political prisoners” to be freed. They also urged Interior Minister Fernando Grande-Marlaska to resign.

The crowd chanted assorted left-wing and anti-police slogans, including “Nazi by day, police by night,” and “Madrid will be the tomb of fascism.” Police were pictured seemingly searching some protesters and checking their IDs, yet it was not immediately clear whether anyone was detained during the rally.

Another march in support of the jailed rapper was held in Barcelona, the capital of Hasel’s home region of Catalonia. Demonstrators marched through the city’s streets, chanting slogans and demanding a “total amnesty” for Hasel. They also carried a Soviet Union flag, footage from the scene shows.

The Hasel-linked unrest began in mid-February when the rapper failed to show up to begin his jail sentence for a 2018 conviction. The musician, whose real name is Pablo Rivadulla, was found guilty of glorifying far-left terrorists and insulting the monarchy through a series of tweets and his lyrics. Namely, he branded Spain’s disgraced former king, Juan Carlos – who fled to Abu Dhabi amid corruption allegations – a thief and a mafia boss.

Instead of handing himself over to the police, the musician barricaded himself in the University of Lleida, calling on his supporters to take to the streets. He was ultimately arrested after a dramatic 24-hour standoff. The protests have been marred with clashes between his supporters and the authorities, but the violence has largely died down.