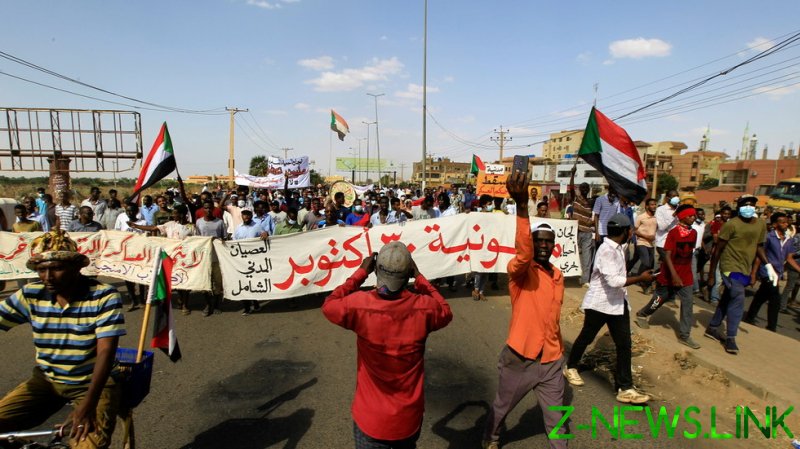 The protesters filled the streets of Khartoum waving Sudan’s national flags as they demanded the restoration of a civilian-led government. Massive turnout was also seen on the streets of some other major Sudanese cities, including Omdurman.

“We will not be ruled by the military. That is the message we will convey,” activist Tahani Abbas told Al Jazeera ahead of the protest. A protester, identified only as Mohamed, said that the army should hand the leadership back to Prime Minister Abdalla Hamdok. “Our demand is a civilian country, a democratic country, nothing less than that,” he added.

Videos posted on social media showed thousands-strong crowds filling the broad streets of the cities. The protesters were chanting various anti-military slogans. According to Al Jazeera, the Sudanese authorities imposed restrictions on internet and phone communications, prompting the protesters to organize through distributing leaflets, spraying graffiti on the walls and staging smaller neighborhood rallies.

Sudan’s police and security forces blocked most major roads in the capital. The military opened fire at the protesters, according to some videos published on social networks. Crowds were shown running to safety in the cities of Omdurman and Nyala as people on social media were saying that live ammunition was used.

At least two protesters were shot dead in Omdurman, according to the non-government Central Committee of Sudanese Doctors, adding that 38 people were injured. Some of them received gunshot wounds. Earlier, the local medics said that 100 protesters were injured in the chaotic scenes that unfolded on Saturday.

The demonstrators also demanded the release of activists detained by the military since Monday when they took power. Led by General Abdel-Fattah al-Burhan, the military ousted Hamdok’s government and announced that a new technocratic government would be formed.

Burhan also announced on Monday that he would be dissolving the Sovereign Council – a body tasked with overseeing the transition period since the ousting of Sudan’s longtime leader Omar al-Bashir in 2019. Burhan himself was previously leading the council.

The general also insisted the military takeover was not a “coup” and the military only sought to “rectify the course of the Sudanese transition.” He also said he was still committed to holding elections scheduled for July 2023 even before the coup.

Many Sudanese did not take the developments lightly, though, as the military takeover immediately sparked massive protests that have since turned deadly with the military opening fire to disperse the crowds. At least 11 people have been killed and dozens injured, according to media reports.

On Friday, the UN Secretary-General Antonio Guterres called on the military to show restraint and condemned the coup. “People must be allowed to demonstrate peacefully,” Guterres said.