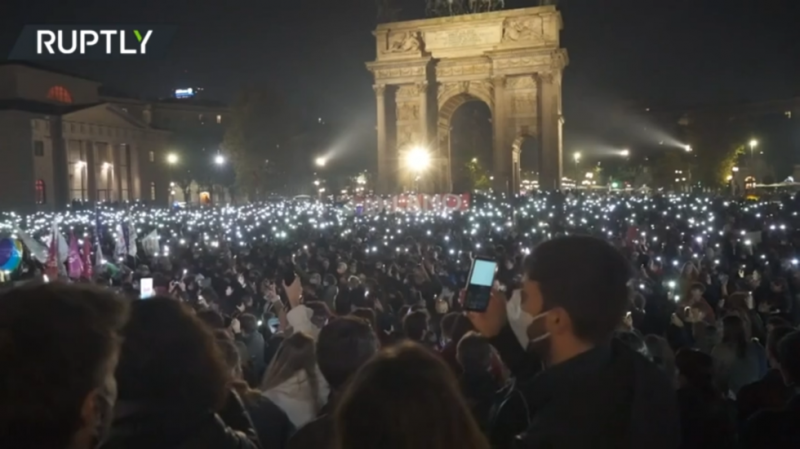 The controversial document, known as the ‘Zan bill’ after its initiator, Italy’s center-left MP and LGBT rights activist Alessandro Zan, was rejected by 154 votes in the Senate on Wednesday, while 131 members voted in favor. First introduced in the lower house of parliament in May 2018, it passed the House of Representatives last year in November, but faced challenges in the Senate. Parliament will now be unable to reopen discussions on the proposed law for the next six months, which leaves little time for it to be approved at all before the legislation expires. “The bill is dead,” senator Dario Parrini told Reuters.

“They talked about us for two years and then as if nothing had happened they threw us in the bin,” a protester in the streets of Rome told RT’s video agency Ruptly on Thursday. “But it is always better than having to accept a watered-down text,” she added.

“We understood that there was a scam,” a protester in the Italian capital told Ruptly, adding that her companions will “fight to get to our rights.”

If passed, the bill would have added new categories to Italy’s penal code section that specifically outlaws hate crimes and discrimination. The current ‘Mancino law’ from 1993 provides for punishment of discrimination acts on racial, ethnic, national and religious grounds. The new bill would have added acts of discrimination and violence based on sexual orientation, gender identity, sex and disability to the list of offences legally punishable with prison sentences and fines.

“Three years ago I was attacked in broad daylight because of my hair color. I spent a month in hospital, it was a brutal homophobic act,” the bill’s supporter in Milan told Ruptly, adding that Italian forces decrying such acts of violence don’t get enough support from other political parties.

Largely seen as a bill aiming to fight homophobia and legally ban anti-LGBT violence, the legislation has also been criticized for its apparent interference with freedom of expression, and possible gay propaganda in Catholic schools.

Proposing to raise awareness of sex and gender related issues within public institutions, including ones for minors, and officially recognize the International Day Against Homophobia, Biphobia and Transphobia, the bill became especially unpopular with right-wing politicians and the Vatican. The latter even lodged a formal diplomatic complaint against it, suggesting it might breach the freedom of thought of Catholics, and provide for prosecution of those who express opinions in favor of traditional heterosexual families.