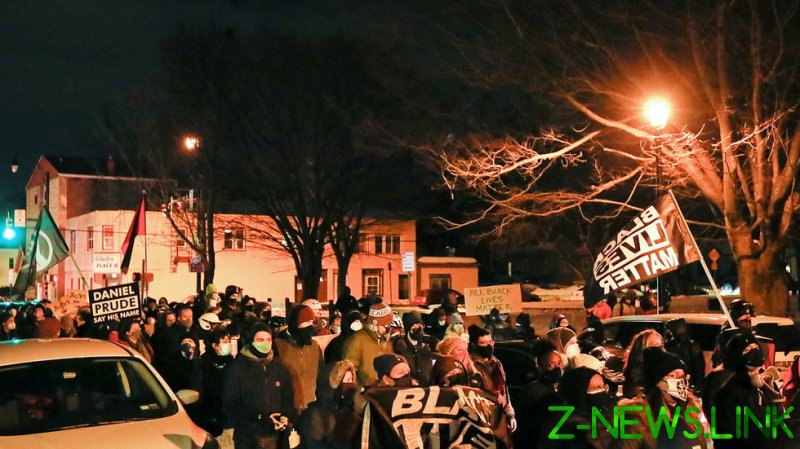 Protesters in Rochester scaled police barricades as they marched down the city streets on Tuesday, venting anger at the grand jury, which effectively exonerated officers who played a role in Prude’s death last March.

Part of the crowd then headed to a police station on Child and Campbell streets.

Protesters and police came to a brief standoff there, with officers in riot gear forming a line between the station and the crowd, barring them from moving closer.

However, it was not long before police retreated inside the building.

Candidate for City Council and Free the People organizer Stanley Martin, who spoke at the march, called to disband the city police force. “The future does not include the RPD [Rochester Police Department] and I know that for a fact,” he said, as cited by the Democrat & Chronicle newspaper. The group, which says it is “building on the legacy of Black liberations,” has publicly called for the abolition and defunding of police and “the prison industrial complex.”

Rochester police urged the protesters to refrain from violence. “RPD supports the rights of our citizens to peacefully protest as the U.S. Constitution allows,” they said.

Police attempted to seal off a highway exit with a row of squad cars in a bid to prevent protesters from interfering with traffic.

However, as the crowd approached the exit, police gave way, allowing the gathered to swarm the highway as they set out towards City Hall.

Large-scale protests over Prude’s death in police custody first rocked Rochester last September, when body cam video of his March 2020 arrest was released. In the footage, Prude, 41, is seen stark naked on the ground and under the influence of the drug PCP – as it was later determined. After the officers put him into handcuffs, he began spitting at them and demanded they give him a gun. As his behavior got increasingly erratic, one of the officers – Mark Vaughn – placed a spit hood around his head. During an ensuing altercation, the officer pressed Prude’s head to the ground, which led to his death of “complications of asphyxia”. It was determined that his use of drugs contributed to his death.