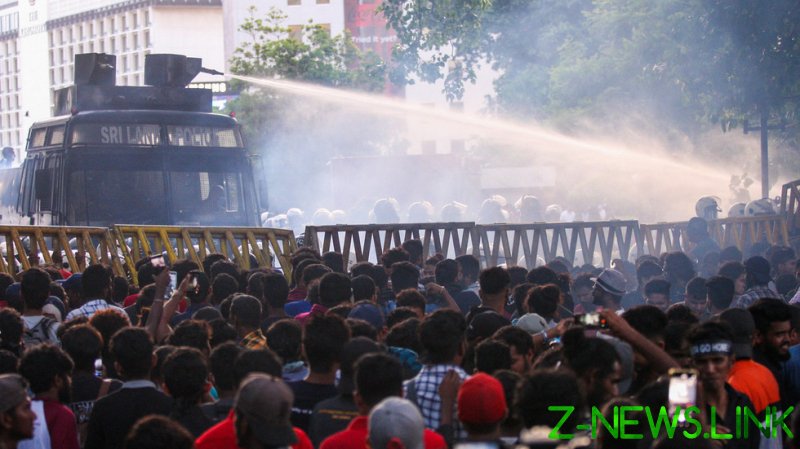 Sri Lankan President Gotabaya Rajapaksa has reportedly had to flee his residence in the capital, Colombo, as thousands of protesters encircled the compound, demanding his resignation.

A local source told AFP on Saturday that the head of state was “escorted to safety,” with troops firing warning shots to keep protesters at bay.

According to Reuters, which cited Defense Ministry sources, Rajapaksa had already been whisked off to another location on Friday ahead of the planned rally over the weekend. Attempts by security forces to prevent demonstrators from entering the presidential residence have apparently failed, an eyewitness told the media outlet.

Footage published by local TV channel NewsFirst showed protesters, some with Sri Lankan flags in their hands, forcing their way into the compound. A Facebook livestream from inside the residence also depicted demonstrators overrunning the building.

A 100,000-strong crowd is believed to have amassed around the presidential residence amid the country’s worst economic crisis since 1948.

According to media reports, 33 people have been injured so far, with two protesters reportedly in a critical condition.

Sri Lanka’s prime minister has summoned an emergency meeting of political party leaders in a bid to resolve the crisis, Indian media have reported. Ranil Wickremesinghe has also apparently asked the speaker to summon the country’s parliament.

Sri Lanka is in the grip of simultaneous fuel and food crises, brought on by the consequences of the Covid-19 pandemic, which caused a downturn in tourism and led to a shortage of foreign currency. As a result, Sri Lanka is unable to pay for imports, and due to a default that was declared on its external debt in mid-April, the country can no longer borrow funds from foreign investors.

The latest crisis has sparked protests across the country, which have been going on for months, especially in the capital Colombo. Protesters are demanding the resignation of President Gotabaya Rajapaksa for mismanagement.