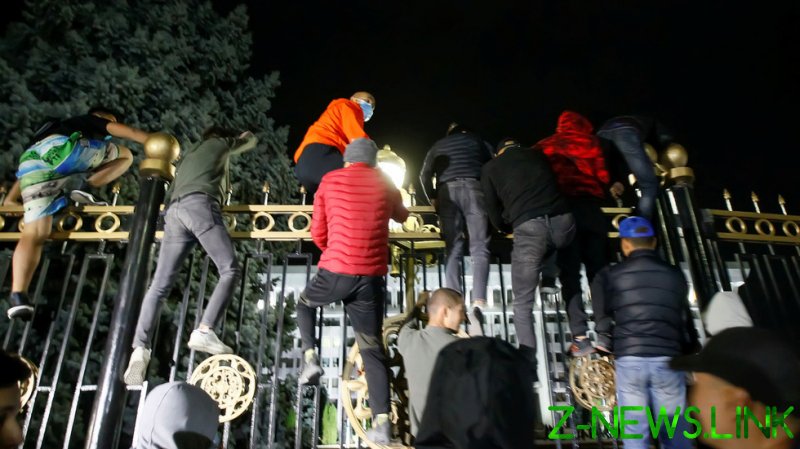 Protesters have “captured” the White House, Sputnik Kyrgyzstan confirmed just after 3:30 am local time, accompanied by photos of the compound.

The palace was stormed after day-long demonstrations in Bishkek and other Kyrgyz cities, with angry opposition activists denouncing this weekend’s parliamentary election as stolen and accusing the government of buying votes and intimidation.

Kadyr Atambayev, the son of former president Almazbek Atambayev, was reportedly ushered into the compound by the protesters. Protesters have also surrounded the jail where Atambayev Sr. is being held, demanding his release.

President Sooronbay Jeenbekov called on the organizers of the protests to be prudent, adding that he remains in Bishkek, according to his press secretary.

Only four parties – three of them pro-government – out of 16 in the running were able to bypass the seven percent threshold and make it to the parliament after the election on Sunday. The 11 losing opposition groups rejected the results and urged people to take to the streets.

One of the parties, Birimdik (Unity) – which won the most votes on Sunday at a quarter of the total – announced that it was ready to take part in the new parliamentary election. Party spokesman Adilet Sultanaliev, took to Twitter to call upon the other three parties that cleared the threshold to follow Birimdik’s example. Asylbek Jeenbekov, younger brother of President Sooronbay Jeenbekov, is a Birimdik member.

The Kyrgyz unrest has parallels with both the recent demonstrations in Belarus – where the opposition refused to recognize the outcome of the presidential election held in August – and the 2014  Maidan uprising in Kiev, as protesters set up tents on Bishkek’s Ala-Too Square.

Kyrgyzstan is a Central Asian state that gained independence in 1991, after the dissolution of the Soviet Union. Monday’s unrest is the third time since 2005 that protesters have demanded regime change in the streets. Its first president, Askar Akayev, was ousted in the ‘Tulip Revolution’ after almost 15 years in power. His successor Kurmanbek Bakiyev fled the country five years later.

Jeenbekov came to power in 2017, as the chosen successor of Almazbek Atambayev, but quickly fell out with his mentor. Atambayev was charged with corruption and sentenced to 11 years in prison back in August.