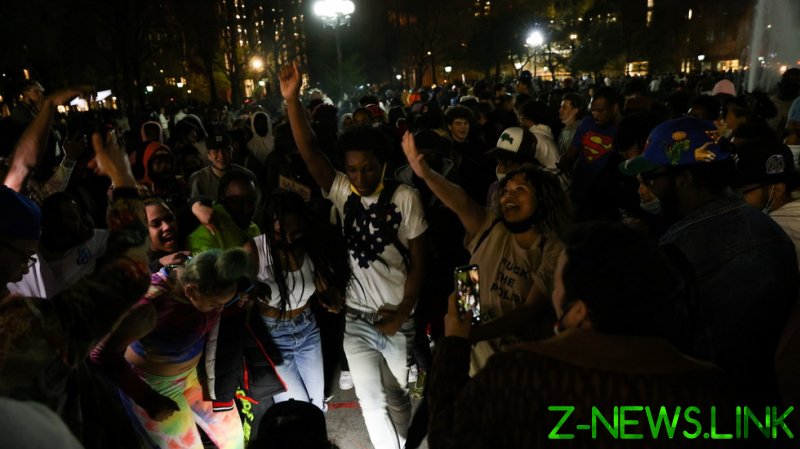 Protesters gathered outside the Barclays Center area in Brooklyn on Tuesday night, hours after Chauvin was found guilty on three counts linked to the death of suspect George Floyd in custody last May, who perished after spending more than nine minutes on the ground pinned under the former officer’s knee.

According to Brooklyn-based photojournalist Issa Khari, the protesters broke off into two groups, one of which remained at the arena to demonstrate, while the other marched down Flatbush Avenue, over the Manhattan Bridge and beyond into New York. Khari described the two factions as “reformists” and “abolitionists,” respectively, with the latter referring to activists pushing for more radical change to the criminal justice system and the complete elimination of police departments as they currently exist in the US.

Headed up by a banner reading “Abolish the NYPD” featuring bloody handprints, the marchers were heard chanting anti-police slogans as they made their way into the Manhattan borough.

At one point, the abolitionist group made a stop to hold a so-called “teach-in” for New Yorkers dining outdoors at local eateries, where one megaphoned activist shouted “Get the f**k out of New York! We don’t want you here!” also alleging the restaurants were “owned by f**king white men.”

Another protester was seen studiously photographing police officers monitoring the march, who largely allowed the rally to progress without interference. There were no reports of arrests.

Back in Brooklyn, demonstrators at the Barclays Center dispersed around 10pm local time, Khari reported, holding one last group chant citing a famous quote from Black Power militant Assata Shakur, who wrote in her 1987 autobiography: “It is our duty to fight for our freedom. It is our duty to win. We must love each other and support each other. We have nothing to lose but our chains.” A member of the Black Liberation Army, Shakur escaped to Cuba from a New Jersey prison in 1979 after she was convicted for the murder of a police officer during a 1973 shootout. She remains a fugitive.