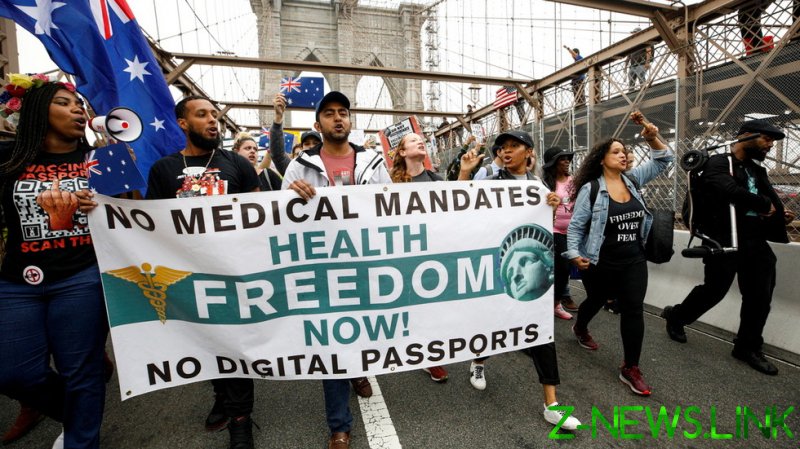 The protest rally kicked off outside the Big Apple’s Department of Education (DOE) facility in Brooklyn, per local reports, and later made its way across the Brooklyn Bridge, toward Manhattan. The action took place the same day a vaccine mandate for teachers came into force in the nation’s largest school district, with non-compliant staffers facing a period of unpaid leave, or the option of quitting with a severance deal.

Videos of the demonstration circulated on social media – much of it captured by videographers Brendan Gutenschwager and Leeroy Johnson – with protesters heard chanting “The system is corrupt!” in one clip.

As the procession moved uptown, a few protesters were seen breaking off the march to demolish a mobile Covid-19 testing tent set up in Union Square. Police soon intervened to stop the destruction, as a woman was heard shouting “Shame on you!” at the vandals. The tent was repaired and looked to be back in working order just a few minutes later, however.

According to city officials, around 90% of all DOE staff had received at least one vaccine dose as of last Friday, though the city’s school chancellor Meisha Porter noted that some 18,000 doses had been administered since that time, as department employees raced to comply with the mandate.

From Union Square, the protest march took a somewhat odd detour, hitting a nearby Australian diplomatic office to denounce that country’s ongoing Covid-19 lockdowns – which have been among the world’s harshest and longest-lasting shutdown orders amid the pandemic.

With some marchers seen hoisting Australian national flags, chants of “Save Australia!” could be heard from the rally as it neared Canberra’s consulate on 42nd Street. Others were heard shouting “We will not comply!”

New York has been no stranger to protests over vaccine mandates and passports as of late, with several erupting last week, including upstate. At least 1,000 demonstrators hit the streets of Manhattan and Staten Island last Monday to denounce mandates for healthcare workers – as well as the Big Apple’s first-in-the-nation vaccine pass system – while another crowd gathered outside the Strong Memorial Hospital in Rochester, where chants of “My body, my choice!” were heard repeatedly, echoing a popular slogan of abortion activists.