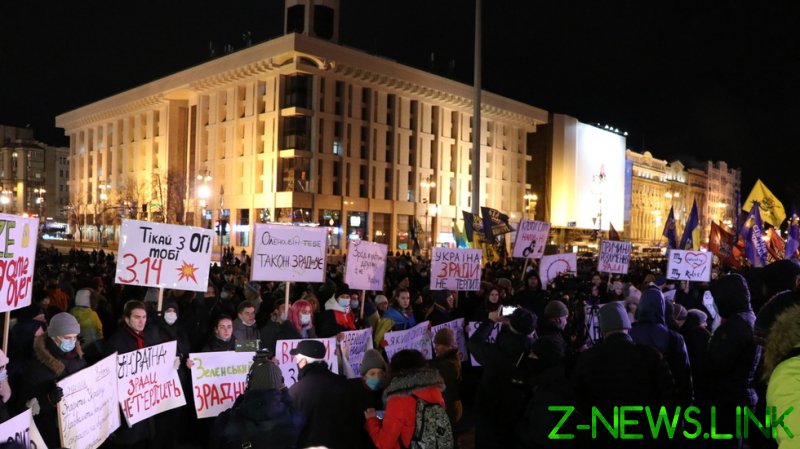 The demonstrations, which kicked off on Wednesday, are understood to have included members of Ukrainian nationalist parties, supporters of former President Petro Poroshenko, and activists representing small business owners and entrepreneurs. A total of around 1,000 people are said to have gathered in the Ukrainian capital, calling for Zelensky’s impeachment and the dissolution of the Rada, the national parliament.

One protest leader told local media, “the regime’s actions amount to a governmental coup. The constitution is being flouted and the nation’s interests are being given away.” Protesters set up a sign declaring “Save Ukraine – Stop the coup” in the iconic Maidan square, the site of the uprising that ousted the country’s elected government and began a turn toward the West in 2014.

The march began around 9am, with police deployed near the parliament building. Streets appeared mostly empty by 10pm. The protest’s organizers announced that there would be another action on December 12.

On November 3, a similar march took place in the same part of the capital against Ukraine’s Covid-19 quarantine and vaccination rules, which critics say have been ineffective and hurt business.

Last week, Zelensky announced that he had uncovered a plot to overthrow him and his government on December 1. He claimed that the plot involved one of Ukraine’s wealthiest businessmen, Rinat Akhmetov, and he dispatched the Security Service of Ukraine, the SBU, to investigate a potential conspiracy between Akhmetov and “certain citizens of Russia.”

In a speech at Wednesday’s protest, Ukrainian politician Alexander Turchinov called the alleged coup a fake, saying, “They look like fools. The threat of a coup is coming from Bankova Street,” where the Ukrainian government maintains offices.