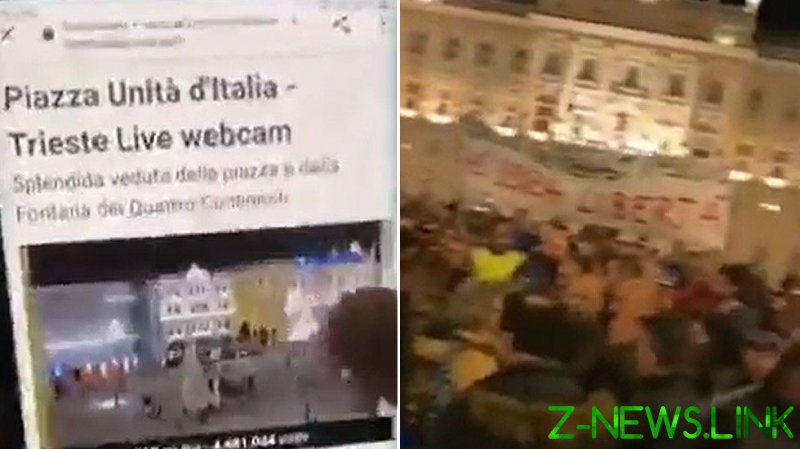 On Monday evening, crowds gathered in the Piazza Unita d’Italia in Trieste to protest against the government’s imposition of a ‘green pass’. The government had made it a legal requirement for all workers to be vaccinated or provide a negative Covid-19 test from the previous 48 hours.

Videos from the square showed hundreds of people staging a sit-in in the northern Italian city, however, as highlighted by one of the protesters in a widely shared video, the city’s webcam suggested the piazza was almost empty.

The footage starts with the camera focusing in on a protester’s phone in which SkylineWebcams.com’s live stream for Trieste’s Piazza Unita d’Italia is shown. The empty square, as seen on the live webcam, appears to be in stark contrast to the reality, as the demonstrator pans their camera to show hundreds of people present in the Piazza Unita d’Italia.

Protesters and others online have accused the Italian authorities of tampering with the webcam to ensure news of the unrest did not travel far.

Others highlighted further discrepancies between the live webcam and the scenes in the square.

Trieste authorities have not commented on whether the feed was tampered with or whether some glitch occurred.
The city on the country’s border with Slovenia has been a hotspot for protests against the imposition of the so-called ‘green pass’. Sit-in protests have been ongoing since Friday when the pass was introduced. On Monday, police clashed with protesters at the city’s port. Water cannon and tear gas were used to disperse demonstrators who vowed to bring the city to a halt.

According to Stefano Puzzer of the Port Workers Coordination of Trieste, some 40% of Trieste’s port workers are not vaccinated. The figure is not representative of the general Italian population, in which over 80% of those over 12 are fully vaccinated.

The ‘green pass’ was implemented last Friday, having been voted into law in September.