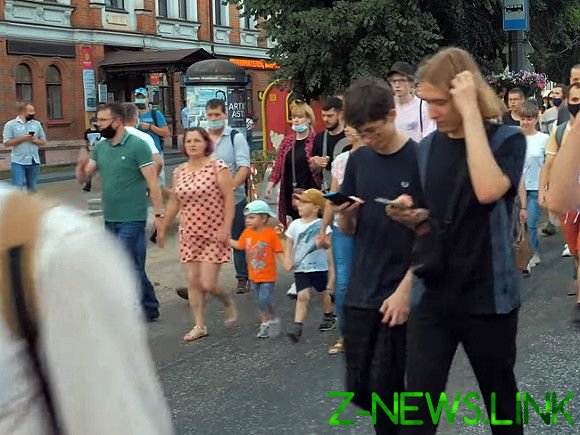 Why protest in Khabarovsk — more important than the nullification of the terms of Putin and the more the other amendments in the Constitution?

First, no one doubted that Putin wants to rule always. Disputes were only about in what format he will do, and it is important for prosharenny of political scientists. I personally even after the castling said that he was going to sit until I retire. But the existence in Russia of politicians who can gather people as much as collected by Yeltsin in the late 80’s and early 90-ies, was doubtful. And after all, Yeltsin, and Furgal is a protest vote for something new, for renewal.

Secondly, we knew about that in the country a lot of state employees and others dependent electorate that believes that it is possible to vote for the eternal Putin on the stump and behind the garages. But for me the news that it is now possible to mass protest rallies, and with a strictly political agenda, and even not in Moscow.

Thirdly, if the vote resets the timing of Putin, the protesters at least in Khabarovsk nullified the vote. It is, as we have seen, means absolutely nothing, including Putin. He is forced to reckon not only with those who voted for garages, but those who go to rallies.

And some of the lessons of Khabarovsk, which make it a political event of the year at least not yet.

There is no difference between consistent and inconsistent action, it reset. Unable to disperse the meeting and resolved not to touch one that ugly midget calls “illegal” — it all depends on the number of participants.

No gubernatorial elections in the near future will not be cancelled because of regions it is really worth. Any attempt to do this could be the beginning of the end. Yes, I would not rule out that we will let the Furgala. Maybe not tomorrow, maybe on their own recognizance or house arrest, but it will be brought to Khabarovsk. In addition, the Charter of the far East gave, say, Konovalov in Khakassia and Sipiagin in the Vladimir region.

Khabarovsk — the first mass protest is not the “vile liberals” and deep people. For him, as we have seen, does not operate tales about the Bulk, the state Department and personally Natalia Arnault. Moreover, they see, as they are afraid of the coronavirus, which was not to vote on zeroing, and terrorist attacks. Is also not valid. And if before in the Kremlin thought it was “nasty liberals” protectory, and deep people for Putin, now the picture is different.

Well, again, that Russia is following the path of Belarus. Scary to write and to copy. The protest underlying asset and the people unite moderate politicians, not radicals, which may be opposition, but the system. Here Furgal just like that. It is if you want the Russian Babariko. Exactly why power in Russia has all chances to lose not Bulk, and the “smart vote”, which will make up each region of your Furgala or Babariko.