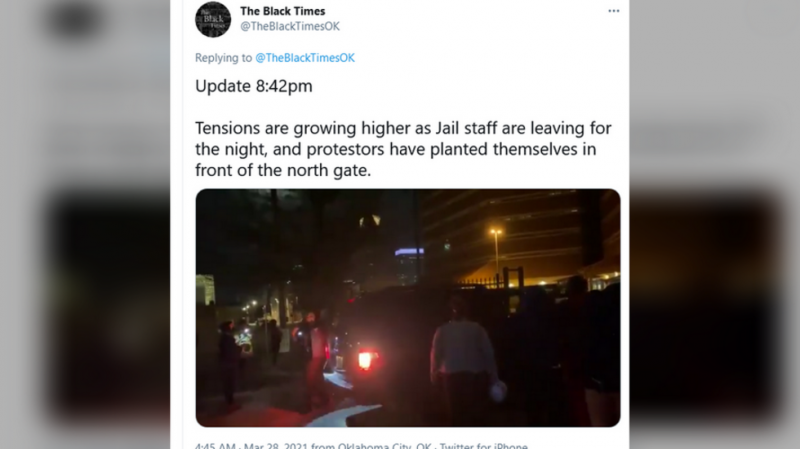 Protesters have flocked to the jail on Saturday night, voicing anger at the way police handled the situation. Videos posted on social media show demonstrators shaking and banging on the facility’s gates and confronting employees leaving the centre.

In one episode captured on video an officer can be seen brandishing a firearm in front of the crowd of angry protesters. At one point, the officer points the gun at the protesters, prompting some of them to raise arms, while others continue to heckle the officers.

The impromptu protest was sparked by an incident inside the jail. Oklahoma city officers were called to respond to a hostage situation that unfolded on the 10th floor of the facility, where “the most difficult inmates are housed,” according to police.

The incident, that was partially streamed live by inmates themselves, began after an inmate overpowered a corrections officer as he came to his cell to give him medication, police said. The unruly inmate then subdued the officer, taking  his radio and keys, which he used to release some of the other 37 inmates in the cellblock.

Videos, apparently filmed by another prisoner taking part in the riot, show the corrections officer on his knees while the inmate holds some object to his neck.

In the clip the alleged hostage taker complains of the conditions in the jail, claiming the inmates were denied showers and that the toilets were clogged.

Speaking to the media after the showdown, police said that they “tried to de-escalate” the situation once they entered the building, but had to take “lethal force” and shot the suspect, deeming the corrections officer to be in imminent danger. Oklahoma County Sheriff Tommie Johnson III told the media that the gas was deployed to get the inmates under control.

The corrections officer has been taken to hospital, but was able to leave the facility on his own.

When asked about the alleged dire conditions at the jail, Oklahoma County jail administrator, Greg Williams, neither confirmed, nor denied the reports, saying that the administration continues to work on their improvement.

“We manage those conditions continually…We have contractors that come in and help us resolve that. So that’s a continual kind of a thing,” he said.