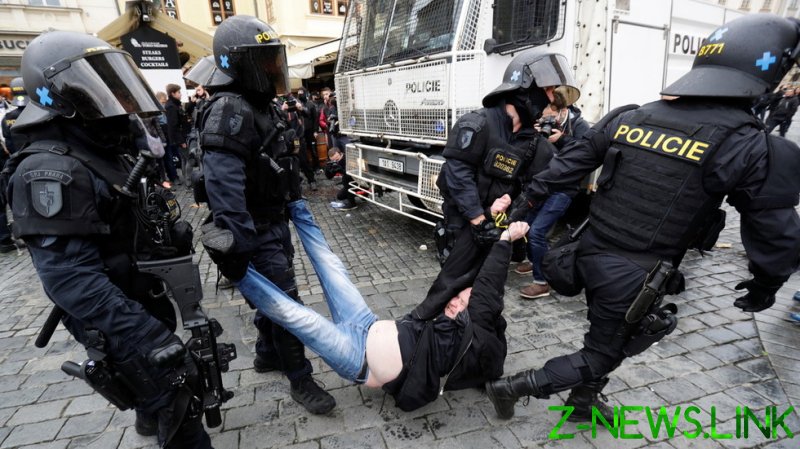 The defiant demonstrators, who were identified by the local media as radical fans of various sport teams, clashed with the police, pelting the officers with stones and firecrackers. Several dozen people were reported injured in the skirmish, including members of the police force.

The rally was gathered to object to the government’s response to the Covid-19 epidemic. One of those rules triggered the violent confrontation. Gatherings of more than 500 people are currently banned in the Czech Republic, and even smaller ones require people to wear face masks and spread in groups of up to 20 people separated by at least two meters.

The municipal authorities estimated that around 2,000 people flocked to the square, and ordered the rally to disperse. While most of the demonstrators complied, some refused and instead confronted the police. Dozens of arrests were made in connection with the riot.

Interior Minister Jan Hamacek praised the police response and accused “several hundred hooligans” of instigating the violence. Prime Minister Andrej Babis told Czech media he was “shocked” by the rioters’ actions and accused them of endangering themselves and others. “I am in favor of harsh punishment in their case,” he said.

The police said the skirmish was prearranged by a group of organized troublemakers. They said they intercepted some of the people, who were going to the square with an intention to fight, and seized weapons, pyrotechnics, and other dangerous items.