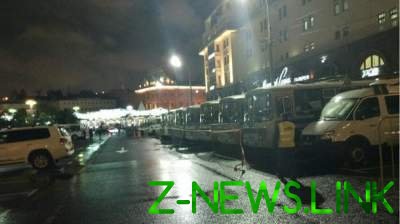 7 Oct in 26 cities of Russia were held pickets in support of opposition politician Alexei Navalny.

On Saturday 7 October at the 65th birthday of Vladimir Putin protests, which on 4 October called on opposition politician Alexei Navalny.

Among the basic requirements of his campaign was:

– to provide political competition in Russia;

– access to presidential elections by the Bulk and any other candidate who, in accordance with the law, will gather more than 300,000 signatures in their support.

According to the “OVD-info” in 26 cities of Russia were detained 290 people.

In Moscow in the night from Saturday to Sunday, after about midnight the police broke up a rally of protesters, 18 people were arrested.

“During carrying out of actions for the most serious violations of public order is composed of 71 administrative report. The average duration of stay of detained persons in the police Department ranged from one to two hours”, – stated in the message of Ministry of internal Affairs of Russia.

Currently Alexei Navalny is under 20-day administrative detention. Together with him were sentenced to 20 days and the head of his election headquarters Leonid Volkov.

Last all-Russia anti-corruption rally on June 12 across Russia were detained over 1,700 people.