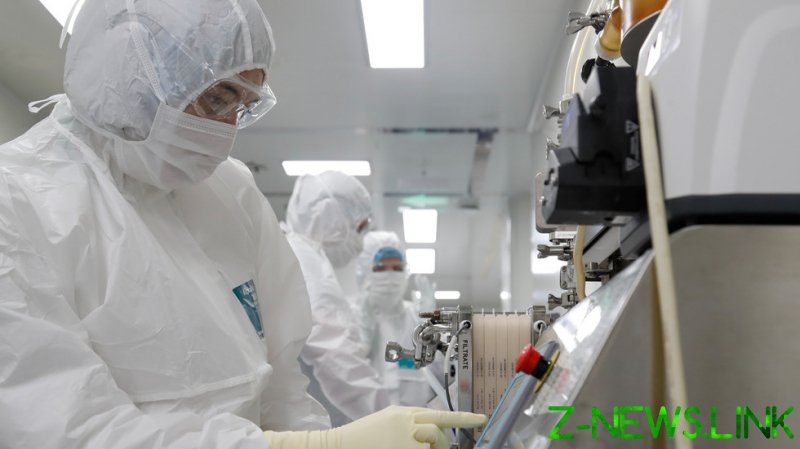 “We were delighted to know that another very strong team of scientists from Australia and the US have developed a similar drug,” Musa Haitov, the head of the Immunology Institute of the Russian Federal Medical and Biological Agency (FMBA), told RT, commenting on a recent announcement by the Australian scientists.

Earlier in May, a research group from the Menzies Health Institute Queensland (MHIQ) at Griffith University working together with American specialists from the City of Hope center said that they “developed an experimental direct-acting antiviral therapy to treat COVID-19.”

The team said they had created a “next-generation antiviral approach” allowing their drug to directly attack the virus RNA, stopping it from replication. “Treatment with virus-specific siRNA reduces viral load by 99.9%. These stealth nanoparticles can be delivered to a wide range of lung cells and silence viral genes,’’ said co-lead researcher Professor Nigel McMillan from MHIQ.

Haitov said that his team at the FMBA Immunology Institute have been exploring the same approach based on viral RNA interference for quite some time, and have already registered a patent for a drug that “has specific… antiviral effect against Covid-19.”

“We knew this approach was explored throughout the world,” he said, adding that the research data published by the Australian and the US team “proves we are on the right track.”

The Russian team published its own research results in the ‘Allergy’ journal on March 15, and the Australian and the US scientists followed with their May 5 publication in the ‘Molecular Therapy’ journal.

“The Australians are going the same way,” Haitov said, adding that he and his colleagues were “only glad” to hear such news. The MHIQ team only mentioned treatment results in mice, adding that the therapy applied to animals infected with Covid-19 “improved survival and loss of disease.”

According to Haitov, the Russian team is well beyond that stage in their trials. “Pre-clinical trials showed that our drug is safe and effective in treatment of animals. It also successfully passed the first stage of the clinical trials as it was proven that [the drug] is safe for healthy people,” the Immunology Institute head said.

The Russian researchers are now conducting phase 2 of the clinical trials on Covid-19 patients. According to Haitov, some 400 volunteers are taking part in the trials and he hopes to finish the tests by the end of the year.

“After that, we would be able to register the drug,” he said.

While similar in some ways, the Russian and the Australian approaches still differ in one important aspect – drug delivery. The MHIQ team opted for an intravenous injection of certain lipid nanoparticles that are designed to deliver the drug to the lungs.

Haitov said that such an approach “raises some questions” that can only be resolved during clinical trials. In his turn, he argued that the delivery mechanism chosen by his team “is safer and more advantageous.”

The FMBA Immunology Institute created an aerosol that needs to be inhaled and then goes directly to the upper and lower airways as well as to the lungs. “The drug is delivered to the cells that are primarily affected by the coronavirus,” Haitov said.

The FMBA Immunology Institute director added that his team is already working on another form of the drug that can be used for preventive treatment of Covid-19.