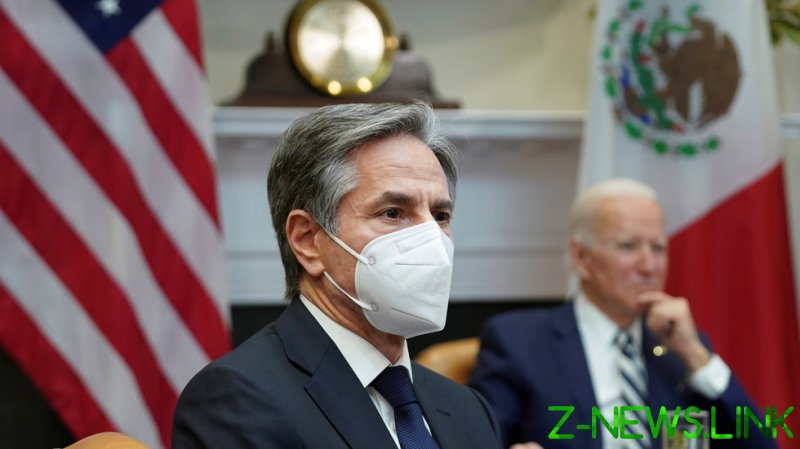 In a speech on Wednesday – the first since he took office five weeks ago – Blinken listed the eight most pressing issues the State Department plans to address, noting that they are linked to domestic policy priorities of the Biden administration.

First, the Biden administration wants to stop the Covid-19 pandemic and “create global health security,” since “none of us will be truly safe until the majority of the world is immune,” Blinken explained.

The second priority is to reverse the domestic economic crisis and “build a more stable, inclusive global economy.” At this point, Blinken more or less disavowed the Democrats’ previous commitment to free trade, saying the US needs to “fight for every American job” and stop countries from stealing US inventions or manipulating their currencies. If this sounds like the Trump administration’s economic populism, in particular toward China, that’s because it is.

Blinken quickly pivoted to the third point, however: the need to “renew democracy” that is under threat worldwide as well as at home.

“Shoring up our democracy is a foreign policy imperative,” because not doing so helps Russia and China “sow doubt” about its strengths, Blinken argued. He also pointed at “rampant” disinformation, “structural racism and inequality” and “violent siege of the Capitol” on January 6.

A strong US democracy will have legitimacy for “defending democracy around the world for years to come,” Blinken said, which is needed because “strong democracies are more stable, more open, better partners to us, more committed to human rights, less prone to conflict, and more dependable markets for our goods and services.”

As to how the State Department intends to do this, Blinken cited Biden’s favorite line about the “power of our example,” but he also disavowed violent regime change as something that hasn’t worked and gave “democracy promotion a bad name.”

Pivoting to internal issues, Blinken’s fourth priority was to create a “humane and effective immigration system” for the US, a “country of immigrants” that needs to address “root causes” of why Central American caravans trek north while welcoming the vulnerable.

Blinken’s fifth priority is to “revitalize ties” with allies and partners, the “force multipliers” of US influence abroad. Though the undertone of his remarks here seemed to disavow the previous administration’s alleged disregard for these alliances, he echoed the Trump-era argument that the US should not shoulder the burdens alone, and others need to do their part.

The sixth and seventh priorities involved championing climate change issues and “green energy” globally, and securing US leadership in technology, establishing “guardrails” to safeguard democracy from threats like the SolarWinds hack.

Blinken saved the “biggest geopolitical challenge of the 21st” century for last, saying the US must deal with China because it is the “only country with the economic, diplomatic, military and technological power to seriously challenge the stable and open international system – all the rules, values and relationships that make the world work the way we want it to, because it ultimately serves the interests and reflects the values of the American people.”

However, Blinken also championed the neoliberal talking points, such as that the effectiveness of US diplomacy “depends in no small measure on the strength of our military” and that democracies are inherently peaceful.

Both were championed in the 1990s by New York Times columnist Thomas Friedman – who once quipped that “McDonalds cannot flourish without McDonnell Douglas” the maker of the F-15 jet since bought out by Boeing.