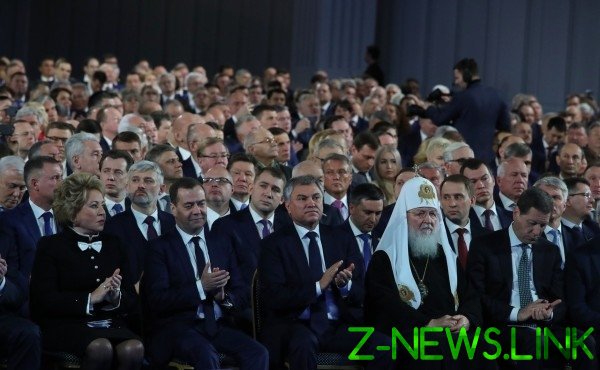 The issue:
1. The bourgeoisie
2. Without a pension
3. Temples
4. Ersatztelliste
5. Appointees

The PLOT №1
https://yandex.ru/turbo?text=https%3A%2F%2Flenta.ru%2Fnews%2F2020%2F01%2F22%2Fderipaska%2F&promo=navbar&utm_referrer=https%3A%2F%2Fzen.yandex.com%2F%3Ffrom%3Dspecial&utm_source=YandexZenSpecial
Russian businessman Oleg Deripaska is confident that the stagnation of recent years and the lack of progress in addressing poverty the responsibility of the Central Bank: “With a significant amount of authority, the regulator deals with the consolidation of the industry, thus creating the thing-in-itself”. According to him, when the stability of the ruble is achieved, the sustainability, without reference to the real challenges of the economy, to talk about some of the growth is simply meaningless. “The tactics of “scorched earth”, which carried away our CB cannot carry neither economic growth nor poverty reduction”, concluded the businessman.
Very interesting to listen to the capitalists with the citizenship of Cyprus about who is to blame for the state of our economy. When the only blame for the impoverishment of the workers of the country are Deripaska and other bourgeois of our country.

The PLOT №2
https://www.finanz.ru/novosti/lichnyye-finansy/pensionnaya-reforma-za-dva-goda-lishila-pensiy-800-tysyach-rossiyan-1028831967
At the end of last year, 355 of thousands of Russians have not retired from the pension reform. During the year the authorities managed to reduce the number of new pensioners by 30%. In 2020, the effect of the reform will manifest itself even more: postponed retirement from 445 thousand people. In total, over the two years the new retirement age will push the release of “deserved rest” for 800 thousand Russians, said the head of the FIU Anton Drozdov.
Annually capitalism gets all its costs: turning off all social guarantees and obligations, which was conquered by the workers of the last century in countless battles of the class struggle.

The PLOT №3
https://www.kam24.ru/news/main/20200110/72493.html
In the settlements of Kamchatka almost every year new temple construction. In the diocese of the Russian Orthodox Church noted that the construction of temples is even faster than planned. It noted that today the temples are built in Petropavlovsk-Kamchatsky and Vilyuchinsk, the village of October, villages in the Kamensk and Vyvenka. In Petropavlovsk, for example, accelerated pace erect Naval Cathedral. Work funded by employers and employees. Last, at the urging of the leaders of the region repeatedly in voluntary-a compulsory order of the diocese have listed their one-day earnings.
Religion and its Ministers the history of mankind were shoulder to shoulder with the class of exploiters – getting your “master’s” piece. So today, under capitalism, the ROC again sculpt their churches and chapels, taking orders for fooling and brainwashing the population: “from knowledge to ignorance”.

The PLOT №4
https://yandex.ru/turbo?text=https%3A%2F%2Fecho.msk.ru%2Fblog%2Fechomsk%2F2571545-echo%2F
Radio station “Echo of Moscow” said a member of the working group on preparation of proposals on introducing amendments to the Constitution. Some people listed in this list will not only confuse your standing in it, but also cause huge issues to the competence of those who this list is made up:
Doluda, N. And. – ataman of the all-Russian Cossack society;
E. G. Isinbayeva – two-time Olympic champion, social and sporting worker (external Advisor);
D. L. Matsuev – pianist (by agreement).
And that’s just three people from a rather large list! Some useful amendments to the Constitution is able to offer a Cossack ataman and pianist, and athletes?! Clearly, this list includes those who will support everything that tries to cram into the Constitution. Then, using these names the people are to suggest that these “heroes of our time” supported such an amendment, then people should maintain silence and not to open your mouth once again.

The PLOT №5
https://yandex.ru/turbo?text=https%3A%2F%2Fnewdaynews.ru%2Fmoscow%2F681673.html&promo=navbar&utm_referrer=https%3A%2F%2Fzen.yandex.com
Muscovites outraged by the appointment of former Vice-mayor of Moscow Marat Khusnullin, Deputy Prime Minister of the Russian Federation, sent an open letter to Russian President Vladimir Putin with a demand to dismiss the official, and the new Prosecutor General Igor Krasnov charging checking the activities of the former head of the Moscow construction complex. The authors note that the result of Khusnullin was the demolition of about 200 historic buildings in Moscow, the destruction of hundreds of hectares of green territories, in particular, part of the Park Kuskovo, the implementation of many construction projects, the abolition of which is demanded Muscovites because of the flagrant violations.
Here are our appointees to high public office. And no human selection is not necessary, because everyone knows each other and most importantly. They do not care about the opinion of ordinary people, because for them, this country Home has never been and never will be, because capital has no Motherland. If ordinary people do not take the situation into their own hands, such appointees can easily destroy Russia under the pretext of “positive” and “socially important” changes.

Comrade, can save this country together, join the struggle for socialism – write on mail [email protected]