The PLOT №1
https://www.currenttime.tv/a/lipetsk-krestnyi-hod-protiv-koronavirusa-otmnen-iz-za-koronavirusa/30483460.html
Procession against coronavirus in Lipetsk had to cancel – due to the threat of the spread of coronavirus. On it informs TV channel “to Lipetsk”. The event was planned for 15 March. Orthodox citizens planned to hold mass automobile procession from the source of St. Nicholas the passion-bearer Tsar Nicholas II, and after the service to go by car in the region.
In the country the epidemic. It is urgent to mobilize doctors and scientists. To develop drugs. But the only action we’re seeing is a parade of bigots, and they are canceled.

The PLOT №2
https://trkterra.ru/news/society/news-region/samarskij-zhirkombinat-zakryli
More than three hundred people can be unemployed in Samara. Samara Zhirkombinat that existed in the region for 70 years, announced its closure.According to the official version, the company has not sustained drop in consumer demand for mayonnaise and sauces on the background of growing agitation of a healthy diet.
And again “rynochek worked out”, leaving people without a job that allowed you to feed the family, but not proposing any work in return. And that’s called lawlessness of labor under capitalism.

The PLOT №3
https://kuzpress.ru/politics/14-03-2020/73631.html
Rosreestr coded information on the real estate of Valentina Tereshkova. Information about the Moscow apartment of the Deputy of the state Duma, the first woman-cosmonaut Valentina Tereshkova classified by the Rosreestr.As noted Sobesednika have Tereshkova in the joint ownership of a flat in a residential building in Granatny lane, an area of 170 square meters and a cost of 200 million rubles. Also according to the Declaration of income Tereshkova in 2018, she owns another apartment with an area of about 90 square meters and is free of charge the apartment of 107,5 meter per square meter. In addition, the first female astronaut in the ownership of a house area of 693 square meters and a land area of 1.3 thousand square meters.
It is sad to observe how the daughter of a simple tractor that the Soviet government was sent to conquer space, easily sold by traitors to the Soviet Motherland for the specie.

The PLOT №4
https://nsk.aif.ru/avto/avtodorogi_novosibirskoy_oblasti_popali_v_chislo_hudshih_po_rossii?utm_source=yxnews&utm_medium=desktop&utm_referrer=https%3A%2F%2Fyandex.ru%2Fnews
The Novosibirsk region was in the “red zone” is among the regions with the highest risk roads, in addition to her among the worst were the Kemerovo, Omsk and Krasnoyarsk Krai. In the Novosibirsk region are still very few cameras photofixation violations, and 85% of roads are only planning to bring it up to standard. The Prosecutor’s office of the region trying to force the municipalities to comply with the legislation for road safety, but in vain. So, in many towns of the region are still not there were road signs and stationary electric light.
And so we live in the developing capitalist country. Somehow, in Soviet times was managed and BAM to build, and Electrification plan to carry out, but in today’s Russia can not be put in proper condition of the road in key transit regions.

The PLOT №5
https://www.gazeta.ru/business/news/2020/03/12/n_14149819.shtml?utm_source=yxnews&utm_medium=desktop&utm_referrer=https%3A%2F%2Fyandex.ru%2Fnews
The head of the chamber Alexei Kudrin gave a forecast regarding the growth of the Russian economy at the current situation with oil prices and foreign currency exchange rate. It is reported by RIA “Novosti”. Kudrin expressed the view that under such circumstances economic growth will remain zero.

And of no growth to speak of and not worth it. Our bourgeoisie have turned the country into a raw appendage of the world market and it is the position of Russia satisfied, because it gives the greatest profit in the shortest time.
Comrade, join for the liberation of the country from the yoke of exploiters –write on mail [email protected] 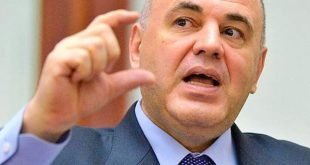