Home / WORLD / Projecting? US slaps sanctions on firm that provided voting tech for Venezuela over its role in ‘rigging’ elections

Projecting? US slaps sanctions on firm that provided voting tech for Venezuela over its role in ‘rigging’ elections 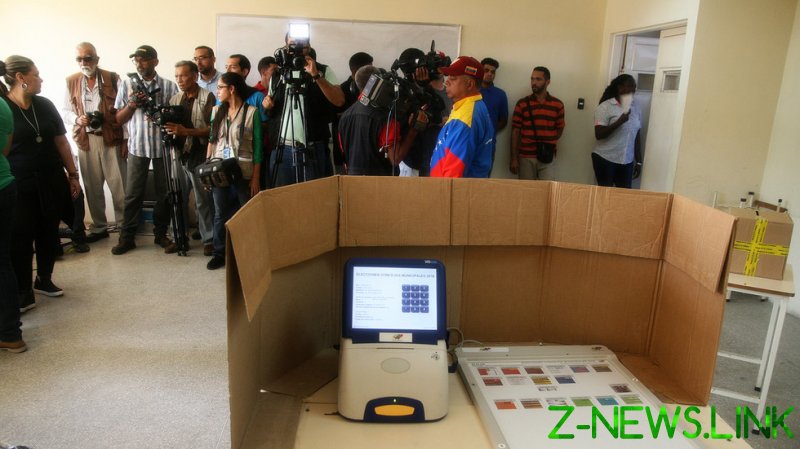 Ex-Cle Soluciones Biometricas C.A., a Venezuela-registered subsidiary of an Argentine-based tech company, specializes in providing biometric verification equipment and has been accused by the US government of “undermining democracy and suppressing the voices of the Venezuelan people,” apparently for the deadly sin of facilitating the recent elections to the Venezuela’s National Assembly.

“Ex-Cle C.A. has millions of dollars of contracts with the illegitimate Maduro regime, providing electoral hardware and software to regime-aligned government agencies,” US State Secretary Mike Pompeo said in a statement on Friday, adding that the company was “aware of and involved” in the alleged Maduro government plot “to rig the fraudulent December 6 elections.”

In addition to targeting the firm, the US has also imposed sanctions on two of the company’s executives “for having acted for or on behalf of Ex-Cle.”

The US and its allies have rejected the results of the Venezuela parliamentary elections that saw Maduro’s socialist alliance landing a major win. The president’s United Socialist Party together with allies took in more than 67 percent of the vote and regained control over the National Assembly, a former opposition stronghold.

Critics, however, pointed to a relatively low turnout and the vehement refusal of the pro-Western part of opposition, led by US-backed self-proclaimed “interim president” Juan Guaido, to participate in the vote. The boycotters instead held what they called “popular consultations,” touted as a fairer alternative to the vote held by the Venezuelan government. The “consultations” took place both online and in-person. However, the results of the de facto parallel vote are hardly verifiable. The organizers were filmed burning at least some of the ballots right after the “consultation,” arguing that the immolation was necessary to protect voters’ identity.

Maduro did not mince words as he responded to the new bunch of penalties, branding them “stupid.”

“Stupid sanctions like the idiot [Pompeo] that he is, as he is on his way out, against the company and the businessmen who manufactured the machines so that the people of Venezuela could vote,” Maduro said, as cited by AFP.