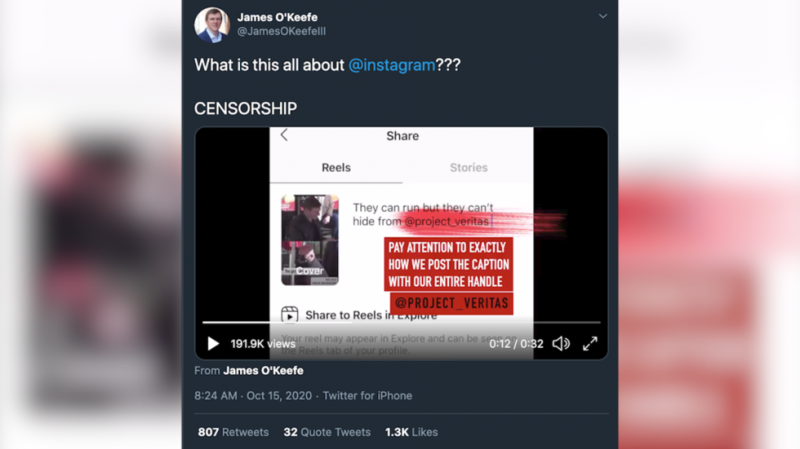 Video of the alleged censorship was uploaded to Twitter Thursday morning and shows the head of the right-wing whistleblower group Project Veritas attempting to tag his own group in an Instagram post.

However, the name is automatically cut off and thus rendered useless, limiting the post’s potential reach and possible traffic to the account, which has proved to be thorn in the side of a slew of tech giants in recent months.

The revelation comes amid a slew of big tech censorship scandals involving Facebook and its founder Mark Zuckerberg, as well as his counterpart at Twitter, Jack Dorsey, for their roles in suppressing political freedoms in New Zealand and interfering in coverage of the latest controversy involving Hunter Biden in the US, respectively.

Allegations are rife on social media of ongoing cover-ups and so-called ‘shadowbanning’ of conservative voices or people attempting to discuss certain topics, such as Hunter Biden’s alleged misdeeds in Ukraine. Some went further and outright accused the social media giants of interfering with and manipulating democracy around the world.

Both companies claim their respective controversies are merely consequences of their attempts to safeguard domestic politics across the globe from outside interference, but many decry the apparent bias to the alleged ‘collateral damage’.